A journey from Coleman to College Station, to Navasota, to Humble, to Nacogdoches, to Houston brought Jana Needham to Cambridge Elementary School. 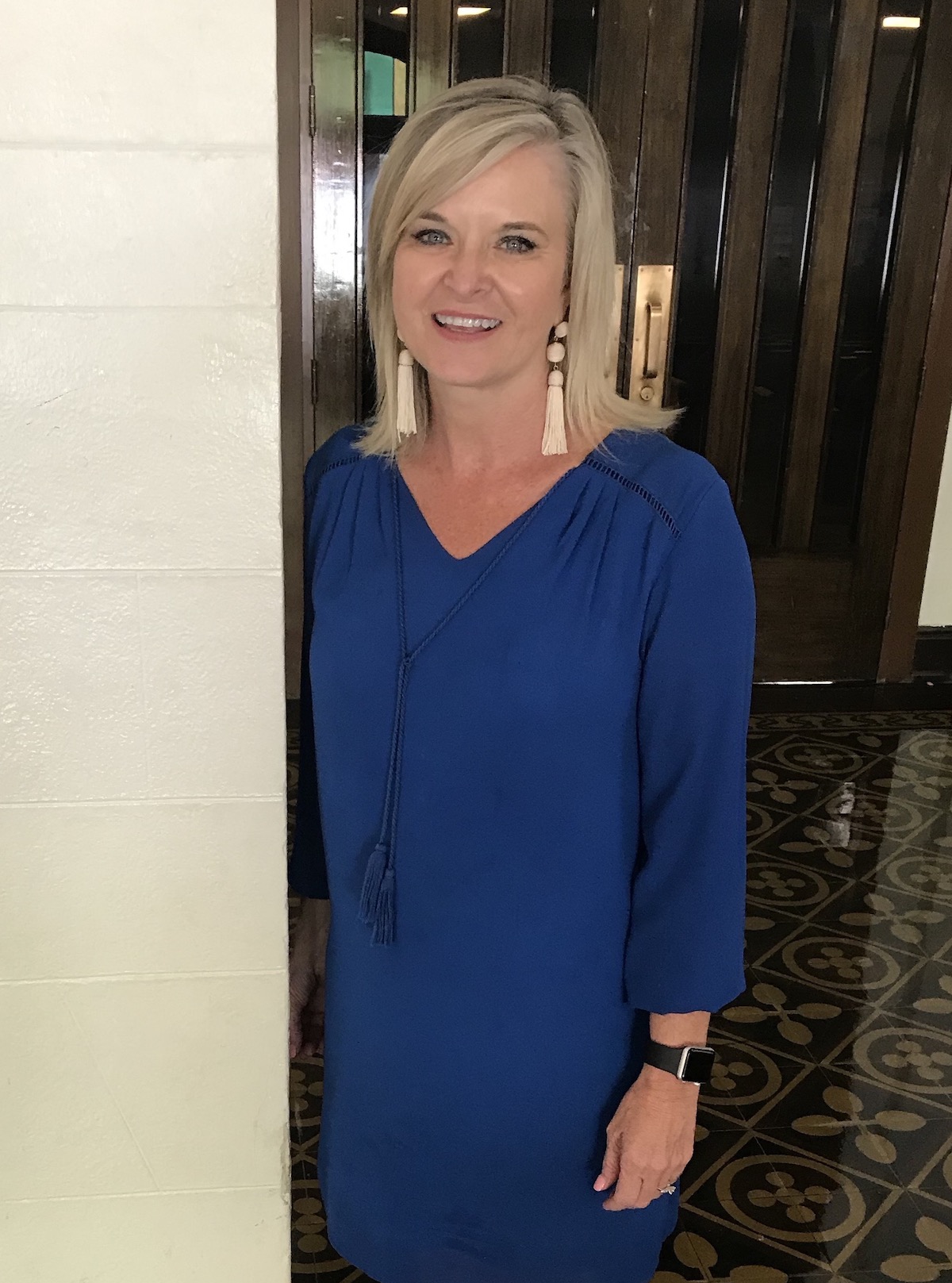 Jana Needham, 52, principal at Cambridge Elementary School, grew up in the West Texas area, near Abilene, in the “little tiny town” of Coleman, Texas, population some 4,800.

Coleman calls itself: “The Friendliest Town in Texas.” And it is apparent a lot of that “friendly” rubbed off on Needham. Watching her interact with staff and incoming students is a joy. The cliché is true about Jana Needham; she has never met a stranger.

Her blue eyes literally sparkle when she talks, and her smile welcomes one and all into her world. She is warm, gracious, outgoing, and more. And she listens, truly listens when people of every age are talking to her.

Speaking of talking, she laughed, as she told me, “I do everything I can to lose my west Texas accent, but to no avail.” And, she’s right. The more excited and animated she gets, the more pronounced that accent becomes.

“Jana’s heart and passion for student learning are evident in all her interactions with staff and CE families. I’m incredibly proud of her focused efforts around character development that makes a difference for all of her students! Cambridge is a remarkable learning environment because of Jana’s student-centered and collaborative style.”

After Needham graduated from Coleman High School, she went on to Texas A&M University and graduated in 1989. “I’d always wanted to go there.” She is a self-described Aggie, through and through. “We Aggies are quite proud.” She next earned a Master’s Degree in educational administration, from Stephen F. Austin University in Nacogdoches, in 1996.

Needham said she exposed both of her kids to A&M. “I brainwashed them, starting at birth, but probably, by the time my daughter, Taylor, turned twelve or thirteen, she told me, ‘Mom, you know I am not going to A&M.’”

Needham frowns and says, “My heart was broken.” But she’s only joking. Her daughter made clear, “A&M is not me; I am more a UT person.” To which Needham added, “she was right.” Taylor is completing her senior year at The University of Texas, in Austin.

Needham’s son, Cody, 24, recently moved from Houston to San Antonio. College was not his thing. He also tried trade school, and now he is working with a plumbing company. That seems to be a good fit.

Needham has two step-children. Hannah, who graduated from Alamo Heights, and is now enrolled at Texas Tech and, Chloe, who is at the Alamo Heights Junior School. Needham says it is really neat having a young child back in the house. “I was missing that. My kids essentially are grown. So, it’s been a blessing raising Chloe. I get another chance to have a little one. I was even planning a slumber party the other day, something I never thought I’d be doing again.” 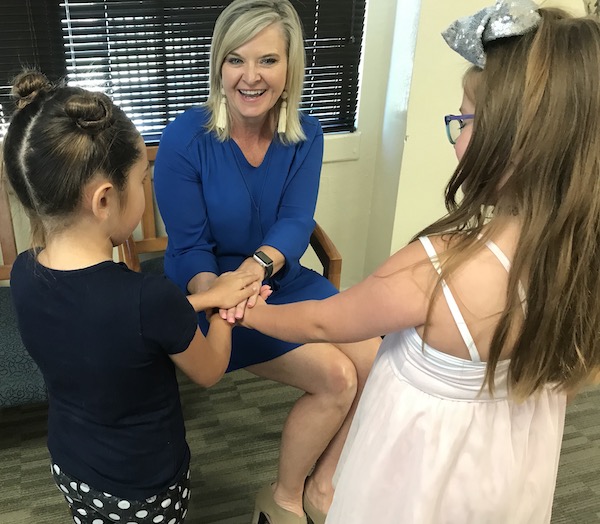 Principal Jana Needham enjoys a moment with two of her CE students.

Her mother, Dellene Driskill, passed away in 2018. She was 85. Her dad, Jimmie C. Driskill, 83, still lives in the house she grew up in, in Coleman, Texas. And that’s part of the reason she moved to San Antonio, to be closer to her hometown and her dad.

She explained, “From San Antonio to Coleman is around a two-and-a-half-hour drive. But from Houston to Coleman, it’s around five hours. Plus, I have friends and some family living in San Antonio.” She has loved reconnecting with all of them.

Prior to moving to San Antonio, she taught just outside of Houston, at Cypress-Fairbanks ISD, for sixteen years. “I taught for three years and then moved into an instructional coach position and then administration.” She was a principal for her last few years there.

She likes the “small-town feel” in Alamo Heights. “This was the best move ever,” she says. “I was very happy at Cypress-Fairbanks. So, I wanted a great school district with a great history. I knew about the district, and I had heard about Cambridge. I knew the reputation. When I told my supervisor I was ready to move to San Antonio, she offered to help.

“She told me she knew a counselor at one of the elementary schools and would make a call on my behalf. The rest is history. Three years ago, Needham was hired as the new principal at Cambridge. “In the small world category, my counselor here is the person my supervisor had called to see if there were openings in the district.” 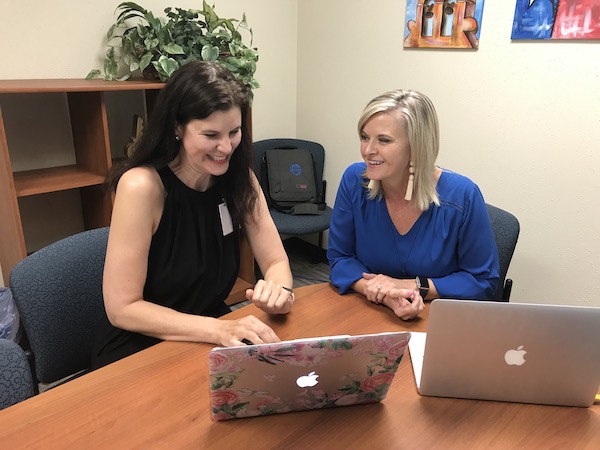 AHISD Superintendent Dr. Dana Bashara told 78209 Magazine, “Jana’s heart and passion for student learning are evident in all her interactions with staff and CE families. I’m incredibly proud of her focused efforts around character development that makes a difference for all of her students! Cambridge is a remarkable learning environment because of Jana’s student-centered and collaborative style.”

It is a mutual admiration society between Bashara and Needham. And Cambridge is a perfect fit for Needham. In fact, she recalled the day she brought her mother to the school for a tour. “As we pulled up in front of the school, and were helping my mom out of the car, she looked at the school and said to me, ‘I hope this is where you are going to retire’.” So does Needham. She has no plans or interest in climbing the administrative ladder.

“I am so happy here at Cambridge. I love my job. I love this school. I hope to stay here.” She’s most proud of Cambridge recently being named a “National School of Character.” It was a really big title for us.

When not at work, Needham enjoys running and hiking, but not in this heat. She also enjoys floating on the Guadalupe River with her kids. Those activities keep her grounded, she says.

What also keeps her grounded, is hanging out with first graders. She says, “I miss not having kindergarteners on our campus. If you ever needed your spirits lifted, that’s where you went.

“But,” she added, “our first graders also do a great job of lifting our spirits. They’re my go-to classrooms if I need a hug.”

Editor’s Note: 78209 Magazine is putting the Spotlight on all the AHISD principals. This column is the second in the series.