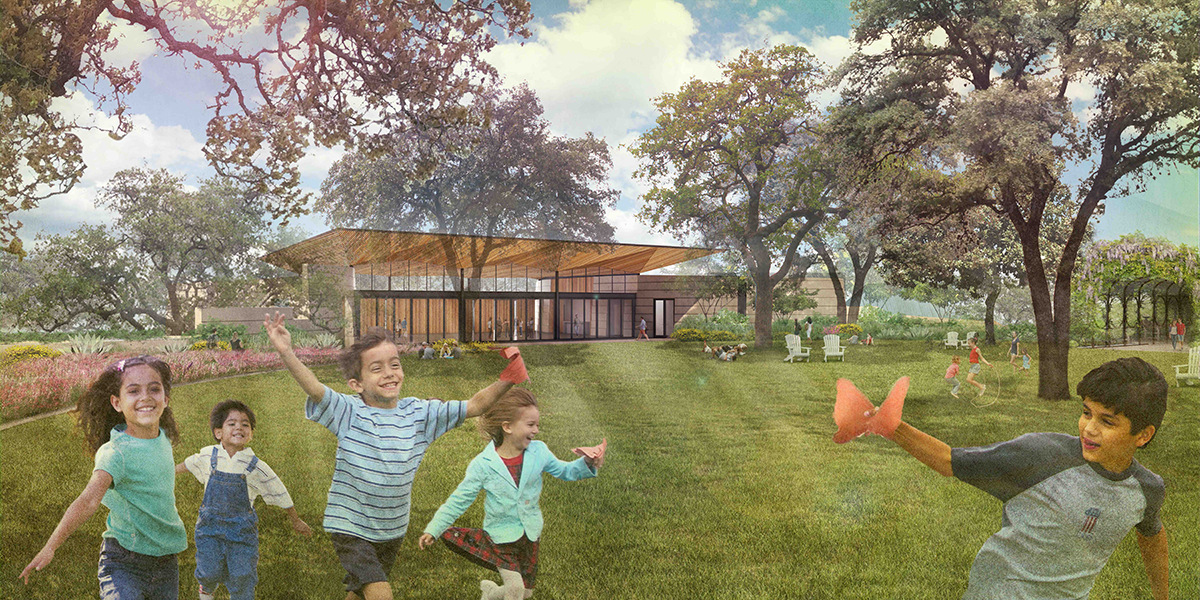 Some students from Lamar Elementary School came to the San Antonio Botanical Garden on Jan. 23 to help break ground on the final round of expansion, renovations and new construction. When it came time to turn over dirt with their small shovels, the children kept digging.

The students’ enthusiasm in being part of the ceremony mirrored the excitement that Botanical Garden officials and supporters have about “Grow. Plants, People, Possibilities,” a $40 million, months-long capital campaign.

“Grow…” involves a new event and education center, an administration facility, an event lawn plus changes and improvements to the Sullivan carriage house. The latter includes converting the house’s first floor into Rosella at the Garden, the newest full-service location for Rosella Coffee Co.

Some of the expansion will help the Botanical Garden to become more multipurpose and reach further out into different segments of the community. The education and event facility is a 9,000-square-foot structure designed to accommodate a variety of functions, from seminars and educator training, to exhibits, public activities and even private and corporate gatherings.

Capital campaign chairman Jeff Rochelle said the education and special events center will encourage visitors “to expand their knowledge about the importance of plants, while the revenue opportunities produced by the facility will help support our programs and growth well into the future.”

The central lawn will be a space for the performing arts, exhibits, picnics and special events. An oval pathway around the lawn will connect the existing and new garden destinations.

The new 3,000-square-foot administration building, garden officials said, will help to meet the needs for increased managerial efficiency that accompanies the garden’s physical and programming growth. The structure will be located on what has been undeveloped land northwest of the Sullivan house. A meandering garden-like path will lead visitors from the current entry plaza to the new facility. 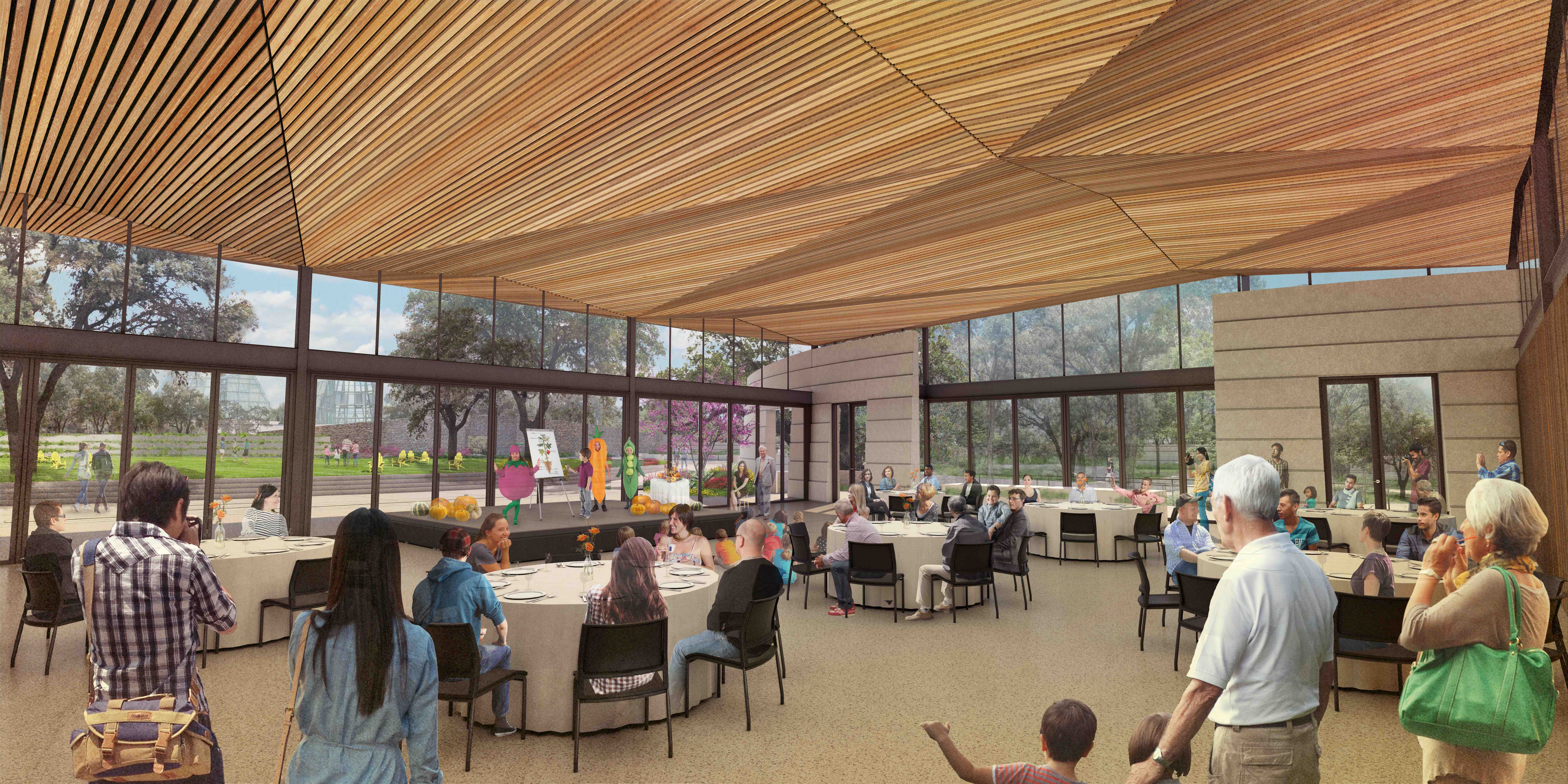 The 122-year-old carriage house underwent a massive renovation in 1995. Prior to this expansion campaign, the Sullivan house had been the garden’s main entrance, housing staff, the gift shop and plant sales and the Carriage House Bistro. Now, the house is partially the site for a new Rosella location, featuring a coffee bar, full bar and dining areas inside and outside. “I think you’ll be really excited by the transformation that takes place there,” Rochelle said of the Sullivan house.

This March, the Botanical Garden is also celebrating the opening of the Family Adventure Garden, another product of the “Grow” campaign. Guests will get to journey through 2.5 acres of nature play and learning space, which features 15 themed galleries that represent the various South Texas regions.

A ribbon-cutting was to take place at 9 a.m. March 3, with the Botanical Garden opening to the public at 10.

Xavier Urrutia, San Antonio Parks and Recreation director, said with the expansion the Botanical Garden has become an even bigger local destination, where more people have more opportunities to enjoy and learn about nature. The garden has more than 150,000 visitors yearly.

“That’s what parks do, they draw people and create community,” Urrutia said. He added that the garden is a big part of the Broadway corridor, which has seen transformations in local cultural and recreational institutions such as The DoSeum and the Witte Museum.

More transformation is on the way, with planned improvements to Brackenridge Park, and to Broadway itself. “Think about how Broadway was just five years ago compared to how it is today. It’s night and day,” Urrutia added.

Officials with the historic member/guest dining club are enlarging the facility by building an outdoor sitting area and accessory structure.

Officials also successfully asked the city to abandon a portion of Argyle Avenue to accommodate the expansion plan.

DoSeum Taps New CEO
Daniel Menelly took over as chief executive officer of The DoSeum on Feb.1, succeeding Julie Huls. He is an experienced science educator and nonprofit management expert with a background in Science Technology Engineering and Math (STEM) education in both formal and informal learning environments.

Menelly comes to The DoSeum from the Rochester Museum and Science Center (RMSC), where he served as president and chief science officer. “While our search took some unexpected time, Dan is definitely worth the wait,” said Suzanne Goudge, DoSeum board president, in a news release. “Dan will be such an asset to our local community as well as the State of Texas.”

Menelly said he found out about The DoSeum during his policy training as an Einstein Fellow at the National Science Foundation. “During my fellowship, I became very interested in the potential to combine and merge models of museum and classroom learning, to inspire and to build on student interest in science, technology, engineering and math, and to keep these learners engaged into their futures,” he said in the release.

“I have long admired The DoSeum’s model conceptually, and I consider San Antonio a very exciting setting for informal learning in all its forms,” he said.

Huls served as interim CEO from September 2016. “We are so grateful to Julie for leading The DoSeum while we conducted the search,” Goudge said. “Julie enabled us to take our time with our search, and we consider ourselves extremely lucky to have had such a capable leader guide us during this interim period.”

Heights Backs Basin Cleanup Agreement
The Alamo Heights City Council on Dec. 11 approved their city partnering with San Antonio in a joint cleanup of the Olmos Basin. The two cities are working with Border Construction Services to remove trash, brush and invasive species from 6.2 acres of properties along the basin.

The target area is between Basse Road and Corona at Jones Maltsberger. San Antonio last cleaned the area between 15 and 20 years ago. The newest round of cleaning will take up to six weeks and was slated to begin in late January.

According to the new interlocal agreement, no heritage tree will be removed unless it is dying or diseased. The two cities also pledged, by agreement, to conduct more frequent cleanups in the basin.