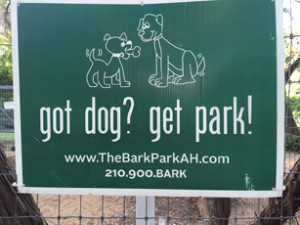 The Bark Park is located on the western side of Alamo Heights, where Normandy and Alamo Heights Boulevard meet. Visitors often park on the side of those streets, closest to the park’s entrance. But when that option is not available, visitors go into the parking lot for the adjacent Little League fields.

The City Council voted unanimously on March 14 to authorize improvement of the right-of-way for visitor parking immediately behind the park, where an extension of Normandy Avenue is platted. This option, according to the nonprofit and city officials, should provide an area 260 feet long and 45 feet deep — size enough for 24 vehicles.

The council also requested that crushed granite be used instead of asphalt for the parking area surface. Police Chief Rick Pruitt told the council that there has been parking congestion in the 100 and 200 blocks of southbound Alamo Heights Boulevard. “The narrow roadway width of 18 to 20 feet may leave a tight passageway for fire trucks if they are needed to respond to an emergency in the neighborhood,” Pruitt said.

The council did review an option for including a crosswalk from the Little League parking area to the southwest corner of Alamo Heights Boulevard. But Pruitt said this location presents several challenges in order to ensure that crosswalk access points comply with the Americans with Disabilities Act. Pruitt commented that according to city staff studying the issue, the road surface height would have to be reduced. Additionally, a water drainage culvert would have to be capped, and safety rails would have to be installed. The crosswalk option would have cost $30,000. So city officials concluded a crosswalk there is not viable for now.

The Bark Park nonprofit encourages community members to support maintenance and other enhancements to the dog park through donations. Visit the Bark Park of Alamo Heights Facebook page for more information.

OAK PARK/NORTHWOOD ZONING DEBATE UPDATE
There is no resolution yet in Metamorphosis Consulting’s request to rezone land in the Oak Park/Northwood neighborhood. The firm’s proposal to tear down one home and replace it with several smaller homes in the San Antonio neighborhood north of Alamo Heights and Terrell Hills has riled a number of residents.
The partners behind the zoning request, Metamorphosis and homebuilder Beckel Runge Custom Homes, were set to originally make their case before the San Antonio Zoning Commission in mid-February. Instead, the project partners have received three continuances from the city.
The project partners are now due to go before the zoning commission during the panel meeting April 5. But before that, representatives of the project were planning to have another meeting with the Oak Park/Northwood Neighborhood Association on March 30.
The representatives of the project have said the smaller single-family homes would lure mainly empty nesters wanting to live in the area. But many residents of Oak Park/Northwood are worried the influx of new homes onto a small lot will lead to traffic and parking issues and disrupt the neighborhood’s harmony. 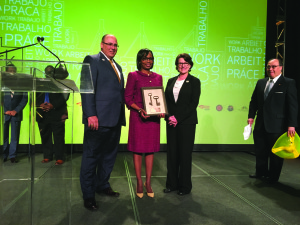 KEYS TO THE ALAMO PRESENTED TO THE CITY
An iconic symbol of San Antonio has been presented to Mayor Ivy R. Taylor as a gift to the city from the Witte Museum. Witte Museum president and CEO Marise McDermott and Witte Board of Trustee member Eddie Aldrete gave the mayor a reproduction of the keys to the Alamo during her State of the City address at the Henry B. Gonzalez Convention Center.

“It is a great honor to share this treasured artifact from the Witte Museum collection with the great city of San Antonio mayor, Ivy R. Taylor,” said McDermott. “The Witte has an important collection of artifacts from the period of the Alamo, including David Crockett’s violin and the remnants of the 1719 Acequia Madre, which fed the Mission San Antonio de Valero, which eventually became the Alamo.”

The mayor received a reproduction of the Alamo keys to underscore her current leadership as mayor and for her role in revisioning the Alamo experience. The original Alamo keys in the Witte collection were made to secure locks on the doors and gates of the Alamo after the fall of the Texas shrine. The keys were made in 1848 by John Conrad Beckmann, a San Antonio blacksmith, when the U.S. government took over the Alamo ruins and grounds.

The keys were given to the Witte Museum collection by Carolyn Beckmann Wells and last displayed at the Museum in 2015. Witte curator of paleontology and geology, Dr. Thomas Adams, took the original set of the keys and worked up a silicon mold. He then produced a plastic resin cast of the keys, which was sent to Absolute Geometries in Pflugerville, Texas, for 3-D scanning. The 3-D scan of the keys was forwarded to Shapeways in New York City, which produced a 3-D copy of the original Alamo keys. “It’s not every day that you get to work with the keys of the Alamo, and it was a tremendous honor,” said Dr. Adams. “The Witte did everything in its power to maintain the integrity and care of this precious artifact.”

“It is such a privilege to receive this gift from the Witte Museum,” said Mayor Taylor. “There is nothing more sacred to San Antonio’s history than the Alamo, and now I am the only person in America — outside of the Witte Museum — who can say I have the keys to the Alamo.”

During its presentation, the Witte offered Mayor Taylor and future mayors additional replicas of this treasured Alamo artifact to present to distinguished citizens as a “key to the city.”