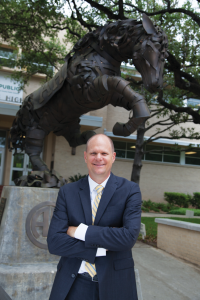 The ongoing viability of all vibrant populations is dependent on their youth. And the primary reason is because the outcomes, good or bad, of today’s children inevitably reflect a community’s “tomorrow.” Without adequate and early nurturing, stimulation and inspiration – on all fronts – that viability could be jeopardized. Fortunately, based on a variety of measuring criteria, the outlook for our neighborhood is bright indeed, and to many, that promise is not only as simple as ABC, but it has a name as well – Dr. Kevin Brown. As the respected superintendent of the highly rated Alamo Heights Independent School District, this devoted ‘09er continues to earn high marks for effectively teaming with caring parents, teachers, students, administrators and others in daily developing and implementing exceptional “lesson” plans. All are targeted to ensuring the current and future success of our treasured toddlers to teens. With such a laudable agenda, it quickly becomes obvious that for Kevin, life can and should be a rich and sustaining educational experience – and not just for him but for all of us.

Now that’s a thesis that deserves an A-plus-plus! Born in Abilene but raised in San Marcos within a close-knit family comprising teachers, professors, school board members, ministers and others involved in academia and instruction, Kevin, as a youngster, never considered a personal career in education. Serendipitously, the seed was planted one day while he was on his high school’s basketball court. The 17-year-old was supervising a group of children during a spirited round-ball game. Noticing his rapport with the youngsters, a member of the faculty observed that Kevin should consider teaching because he “might be good at it.” Surprised by the advice, the flattered teen wasn’t convinced, but as he remembers, “The comment stuck with me.” Later, during his college years studying pre-law, he also did part-time work as a camp counselor. It was during this time as a counselor when the realization became evident that he “really loved helping young people.” Leaping off the law track, Kevin, supported by family and friends, committed himself fully to a life in education and, as he remembers, “I’ve never regretted the decision.”

After graduation from the University of Texas in 1991, his first official teaching job (history, government, psychology and student leadership) was at San Antonio’s Southwest High School. By the end of that first year, the students and faculty had voted Kevin as his campus’ “Teacher of the Year.” Not a bad start for a rookie! From there, his recognized abilities took him first to Round Rock (teaching macroeconomics and serving as chair of the social studies department), then on to New Braunfels, where, moving up the ladder of responsibility, this natural and well-liked administrator served at several schools as assistant principal and principal. During this productive time, Kevin bolstered his credentials by obtaining a master’s degree in education administration from Texas State University, where he was selected as Outstanding Graduate Student within the College of Education. Some years later, while employed within the Heights’ system, he earned his doctorate in education administration from Texas A&M University. Kevin’s doctoral research, fittingly enough, focused on the talents and qualities of effective teachers and how they can be indentified for selection. With a résumé such as this, a future superintendency seemed inevitable, and fortunately, Alamo Heights was to be the fortunate recipient. Kevin’s predecessor, Dr. Jerry Christian, was aware of the young educator’s good works, most recently in New Braunfels, and tried to recruit the up-and-comer in 1998. Kevin declined because, as he relates, “I had not accomplished everything I wanted to.” Two years later, with his “campus in great shape,” Kevin accepted Christian’s second request and joined AH’s department of human resources.

With Kevin’s belief in the importance of “providing the best teachers for our students,” as well as his being an admitted “people-person,” the position proved to be ideal, and he subsequently demonstrated his adeptness at finding and keeping many gifted educators. While happy in his HR role, with Dr. Christian’s retirement in 2008, Kevin was the obvious choice to assume the role of superintendent, a position he’s excelled at and thoroughly enjoyed ever since. As superintendent, Kevin ably oversees six top-rated schools with 4,800 motivated students and 624 dedicated employees. And as the district’s head administrator, he still sees as one of his primary roles the recruitment and development of an ever-evolving staff comprising the best talent available while always fostering support by an involved and caring community. Student input also remains key to his overall approach. As he relates, “Collectively, we have made great strides in the area of designing engaging educational opportunities (a strategic plan) that result in articulating a diverse and rewarding curriculum leading to profound learning.” (For information about Kevin and his team’s recently enacted 2015 AHISD strategic plan, visit: http://ahisd.net/about/strategicplan.html.) But what is his most important function?

A proud Kevin offers, “Getting great people to come together around a single vision.” And that vision is nothing less than “doing what’s best for our children by instilling a lifelong love of, and appreciation for, the educational experience.” With such a philosophy, ‘09’s future does indeed look bright! WHEN SCHOOL’S OUT While certainly focused on his academic responsibilities (including attending lots of school sporting events), Kevin does have an existence beyond campus life. Happily married, he met his wife, Page, while attending UT when both were in the band (she on the trombone, he, the trumpet). Every four years or so, the musical couple return to Austin to play in the University Alumni Band. Page majored in radio, television and film at UT, then went to law school at Baylor. She successfully practiced law for a number of years before transitioning full time into motherhood, watching after their two beloved daughters — Hannah, a senior, and Molly, a freshman, both at Alamo Heights. However, Page was recently tapped to produce a movie. And additional family time for all annually includes lots of travel – especially to Colorado, where the foursome enjoy hiking and fly-fishing.