The Store the Doyles Built

Its a Fun Place to Shop

Some things are meant to go together: peanut butter and jelly, macaroni and
cheese, Donny and Marie. But what about drills and dog beds? Power tools and
pretty plates? Light bulbs and luggage? Sunset Ridge Home and Hardware owners
David and Amy Doyle think so, and judging by their 18 years of success in the
Sunset Ridge Shopping Center, customers agree.

“We always thought the center needed a store like this, we just always thought
someone else should open it,” laughs David, who says the concept for the shop
was inspired by a similar ACE hardware store the Doyles used to frequent while
living in Chicago.

“It was like ACE hardware meets Crate and Barrel,” says Amy, who grew up
in the community she now serves. “It was really unique.”

FROM THE GROUND UP

Moving from a fast-paced corporate world in Chicago to owning a mom-andpop
business in a small neighborhood was a decision spurred by the fact that both
David and Amy wanted to take charge of their own lives and be their own boss.
After a vacation to the family’s Canyon Lake house was interrupted by a lastminute
business trip, the Doyles knew the time had come. A phone call to ACE
Hardware revealed that the company desired a presence in Alamo Heights, and the
Doyles and their three children left corporate Chicago behind and came back to
Amy’s hometown.

Inspired by the thought of what would happen if Bob Vila and Martha Stewart put
together a store, the Doyles opened their retail doors in 1995 as a sort of ACE Hardware,
Williams-Sonoma and Starbucks Coffee hybrid. “At the time there were no
local coffee shops in the area, so that really got us some attention,” recalls David.
In addition to a place for customers to gather for a warm cup of joe, the Doyles
offered a unique blend of merchandise that appealed to both men and women.
“That’s what makes it fun,” says Amy. “Couples can shop together.” 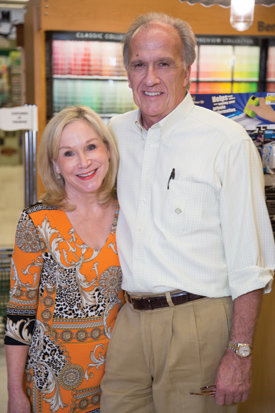 What keeps a retail business thriving in the same location for nearly two
decades? According to David, it is an organic process that stems from knowing
your customer and evolving to meet changing needs. “Almost everyone tries to
adapt another concept or style from someone else in the beginning, but you quickly
learn that it doesn’t translate,” he explains. “You have to adapt to your own physical
space and customer.”

That is why, when coffee shops began springing up all over town, the Doyles
closed their coffee bar, focusing instead on building up the unique inventory for
which they were becoming known. What began as a retail space filled with approximately
80 percent traditional hardware items and 20 percent Crate and Barrel-
type goods transformed over the years into the 60/40 mix it is today. “We’ve
really become very gifty,” says Amy in describing the store’s current inventory.

“Part of the beauty of being a mom-and-pop business is that you can morph
and niche into different categories,” she adds. “You can test the water, and if it
works, you can go deeper.”

Going deeper for the Doyles has included the addition of high-end cutlery, candles,
cards and gourmet kitchen items along with the usual convenience hardware
items such as paint, plumbing needs, air filters and even batteries. A bridal registry
affords couples the opportunity to register for such items as Vietri china, Breville
appliances, Big Green Egg grills and White Wing luggage, all under one roof. “I
think the only thing we don’t sell is clothing and makeup,” jokes Amy.
Going deeper also means going farther. In their quest to bring customers unique
items that they won’t find anywhere else, the Doyles have extended their buying
trips to include visiting European vendors and bringing back unusual seasonal
décor. “You see a lot of the same vendors at all of the U.S. markets,” says David.
“It’s fun for us to find something new and bring it here before anyone else, and at
a better price.”

David is quick to point out that just because Sunset Ridge Home and Hardware
is a neighborhood boutique-style shop doesn’t mean that customers are going to
pay higher prices. On the contrary, the prices on items carried in the big-box stores
are the same, and if a customer finds the exact item for less, Sunset Ridge offers
a price match guarantee.

“There is a common misconception that our prices will be higher,” David explains.
“What many people don’t realize is that the manufacturer, not the retailer,
sets the price on those brands.”

It’s not every couple that can work, play and live together, but the Doyles (who
have been married for 30 years) make it seem simple. An early riser, CPA Amy
comes in and works on the company books and accounts before leaving for her morning exercise
class. David and Buddy (the Doyles’ Labrador Retriever) arrive later and take care of operations until the couple meet up
again for lunch. “Our business philosophy has always been totally in sync,” says Amy. When they aren’t working together, the
Doyles are playing together. David is a pilot who, when he isn’t flying his own plane for fun, is traveling with his wife to
visit the couple’s children and grandchildren, or to check out a new market. “We really enjoy traveling and
getting out of San Antonio during the warmer months,” he says.

When the summer’s over, however, you can find the Doyles back to business,
preparing for the holidays and bringing back fabulous finds from their market trips.
“Our tag line when we opened was that this was ‘a fun place to shop,’” says
Amy. “We want to keep it that way.”