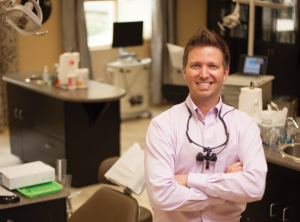 Dr. Bartholomew “Bart” Wilson has been practicing orthodontics since December 2014, and he and his clinic, Mission Orthodontics, are already making an impact. “I’ve always been interested in the sciences, and I’ve always been interested in people’s smiles, so those two things go hand in hand,” he says. It’s been a journey across half the country for Wilson. Born in the Midwest, he made his way to the East Coast for college. Wilson explained that since high school he wanted to have his own practice. At the least, that meant having a basic understanding of running a private enterprise.

“My best mentor, my dad, who’s worked with a lot of physicians, told me that when you’re in medical school or dental school, you don’t get business training,” Wilson says.
“So he told me while you’re an undergraduate student, why don’t you get some background in business?” So Wilson graduated from business school with a major in finance in Wilmington, N.C. He next spent four years in dental school at the Medical College of Georgia in Augusta. Immediately afterward, he was accepted into the orthodontic residency program at the same school, where he spent 30 months developing and furthering his skills as an orthodontist. 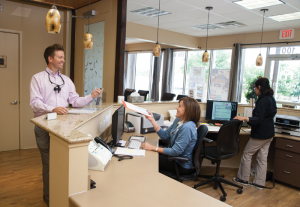 During his second year of residency, Wilson passed the American Board of Orthodontics (ABO) written exam. Last spring, he presented six of his own finished cases to the ABO in St. Louis and was awarded diplomate status. According to Wilson, the diplomate designation helps to set his practice apart from similar clinics in the area. How did Wilson find his way to South Texas? As he graduated from the residency program, he sought a way toward having his own practice. “It was a family decision. I was looking for a place where I could work, and my wife, Nicole, was looking for a place to work,” he says. “As former military, my wife had plenty of options here in town. That’s ultimately what brought us here.”

Wilson also learned of an existing orthodontics practice on West Sunset Road — not far from Alamo Heights and the Alamo Quarry Market — that was for sale. “Everything fell into place right when I was graduating from the residency program (December 2013), and I got here in December 2014. I went to work right away,” he says. Located in a small two-story office building at 156 W. Sunset Road, Mission Orthodontics provides two-phase orthodontic treatment for Invisalign, SPEED system braces, Clear Braces and more. This is a specialized process combining tooth straightening and physical facial changes. The goal of two-phase treatment is to maximize healthy, functional and aesthetic results that will remain stable throughout one’s life. According to Wilson, the previous owner/operator of the orthodontics practice stayed there five or six years. That same man is now in residency to become an oral surgeon. “He had developed it to a certain degree, and it was my time to step in, cultivate relationships with people in this community and really integrate the practice into this community,” Wilson went on to say. 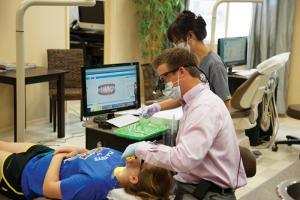 As for the location, Wilson found the neighborhood accommodating. A variety of small medical and dental clinics have sprung up in and around the Alamo Quarry Market in the last few years. Additionally, Christus Santa Rosa built an outpatient surgical facility in the area. “When I first looked at Google Street View, it mapped out Broadway and Sunset, but there was hardly anything here on Sunset. Now you see all this growth,” Wilson says. “I think it’s a great thing for all the business owners on this street. I’ve met with several of them, and we plan on staying here. There’s plenty of traffic.” Wilson says he credits teamwork and setting a tone of confidence and comfort from the start with patients as reasons for early success at Mission Orthodontics. The staff includes office manager/new patient coordinator Mylene Decker, new patient coordinator Tammie Robbins, and orthodontic technicians Sandra Martins and Kevin Barbosa. The Mission Orthodontics clinic includes a children’s entertainment area and a relaxing reception room. There’s also an open door policy, meaning parents are welcome to come into the treatment area with their child.

Mission Orthodontics does not operate only in San Antonio. There are locations in Floresville and Karnes City, the latter clinic having been recently acquired by Wilson’s practice.
“We see most of our patients at our main operations here. One day a month we’re at Karnes City. One day a month we’re at Floresville,” Wilson said. “While our practice is focused on the Alamo Heights area, we draw a lot of patients from the southeast part of town. In that area, there are no orthodontists. They need access to care.”
At home, Bart Wilson is father to stepson Bodie. Bart, Bodie and Nicole enjoy the outdoors or a family movie in their off time together. Additionally, Bart likes to play golf in his spare time. Four years ago, Bart entered Bodie and Nicole’s lives after Bodie turned 3. Nicole and Bart celebrated two years of marriage in May, and they are expecting a daughter in August. “Being a stepfather has its challenges but is certainly rewarding,” Bart said. “Bodie does have a good relationship with his dad, but I’m there to help nurture and guide him and be a good fatherly figure.”