’09ers And Their Pets

Rescued from near death to a wonderful life…

Layla is a glossy mixed-breed beauty with a never- ending smile. This is actually odd, considering what she has suffered in life.

“Layla was a cruelty case, attacked by a San Antonio man who took a screwdriver to stab her 30 times,” says owner Chris LaBrie, DVM, who then worked at a South Side veterinary clinic. Bexar County sheriff’s deputies brought in a severely wounded three-month-old pup for treatment. They wanted to save her life so that they could prosecute the felon.

LaBrie says Layla was even in the news as law enforcement searched for her attacker, apprehending him and eventually sending him to jail. She stayed at LaBrie’s clinic for three weeks.

“Then she was spending more and more time in our office than in the kennel,” the veterinarian says. “I was talked into adopting her by the staff. She didn’t have a place to go, and she was so sweet.”

The handsome young doctor, whose father is also a veterinarian, takes care of Layla at his Terrell Heights home. Layla has a “sister,” a dachsund, owned by LaBrie’s fiancée.

“There is no excuse to hurt an animal,” he says, “unless the animal is hurting you. If you have problems, go punch a wall or something.”

Layla is still an office dog, going to work with her daddy every day, happy to be with people, kids and the other dogs coming to his Alamo Heights clinic. 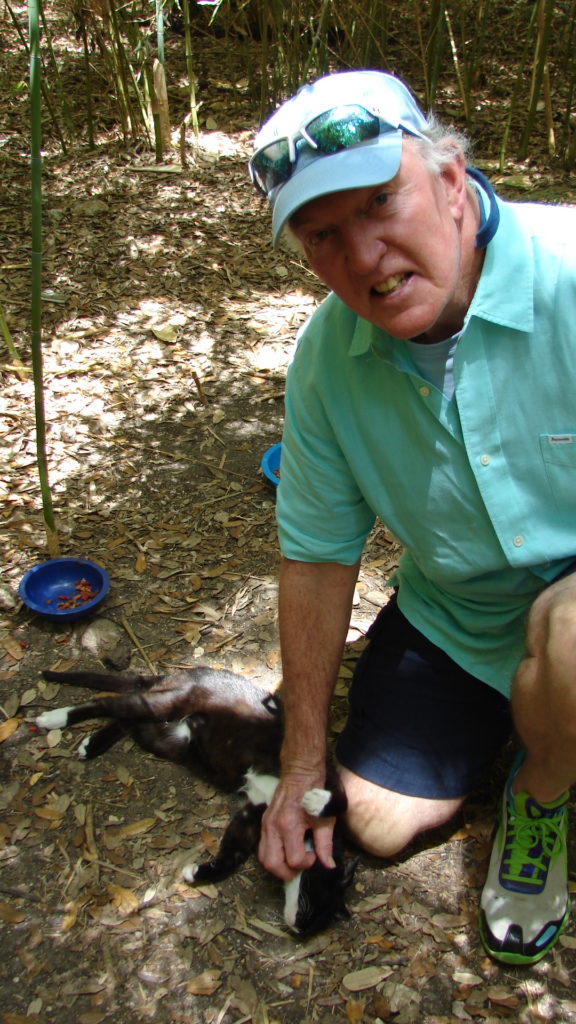 You wouldn’t think that a bunch of skinny stray cats would call the stately Stratford Condominiums home – but they do. That’s how residents and sisters Margaret Spencer and Pat Evans ended up with BeBe and Mr. Wilson, two cats they’ve had for some 15 years. The pair appeared on their doorstep in the middle of the night, looking for food and a home.

“Then I came to learn that there was a feral cat colony next door at Incarnate Word, and I thought that the cats were probably an overflow,” says Spencer. In fact, BeBe and Mr. Wilson belonged to a group of some 12 cats, now residents of The Stratford’s parking lot.

“And then Chief Pruitt started this Trap, Neuter and Release program. I started working with his volunteers. Finally, most of our cats were neutered. Through attrition, some of the cats began to disappear,” spencer says.

Feral cats don’t live long, maybe five to seven years. It’s like being homeless. Living on the streets is hard on them, and all sorts of dangers can spell their doom.

The very lucky gray and white Mr. Wilson is now old and primarily creaks around their large apartment home, eating and sleeping. BeBe is a large black cat with green eyes and a hefty figure. She is very, very spoiled. “She refuses to go outside,” says Spencer. “She thinks, ‘Oh, that’s a bad world outside.”

Spencer says she and her sister love their cats. “We became attached to them, like you always do.” They also feed newcomers Dudley and Herman, who dream of one day becoming indoor cats, too.

“He could sense that something was very bad and that we were very sad,” says Grace, Valeria’s mother. Valeria was just diagnosed with a particularly virulent form of leukemia a few years ago, when she was only 14 years old. She passed away last year.

Her brother, Daniel, a recent college graduate now in the professional world, says the family traveled the country for a cure. “We were in Washington, D.C., Philadelphia and Houston,” he says.

After treatments, Valeria couldn’t wait to come home to Bisket, who was always there waiting, ready to aid and to comfort. “She would come home and sit with Bisket and just hold him and pet him,” says Grace.

“We had wanted a small dog,” she says, remembering how Bisket was a Christmas present 10 years ago. “But Valeria was crazy about Bisket. It was a quick bond,” says Samuel, her father.

After Valeria passed away, the family realized that Bisket was a living link to their precious daughter. They created a new schedule, which meant lots of extra walking with Bisket. He needed some grief therapy, too.

“Bisket was stressed and sick during her illness. I think it was the lack of attention,” says Daniel. “For me, Bisket is a connection to my sister. In many ways, he is the last living remnant of her.”

Now Grace is also comforted by her daughter’s dog. “I find myself by myself a lot, and Bisket is my companion. I talk to him, and I feel safer at night,” she says. Her husband and son travel for business.

She has advice for those with children suffering an illness: “They don’t want to talk about it. They keep a lot to themselves.” But to the dog, she says, a child will freely unburden himself, releasing his deepest fears and feelings into a pooch’s willing ear. — Roxie