Romping Room In A Garden Home 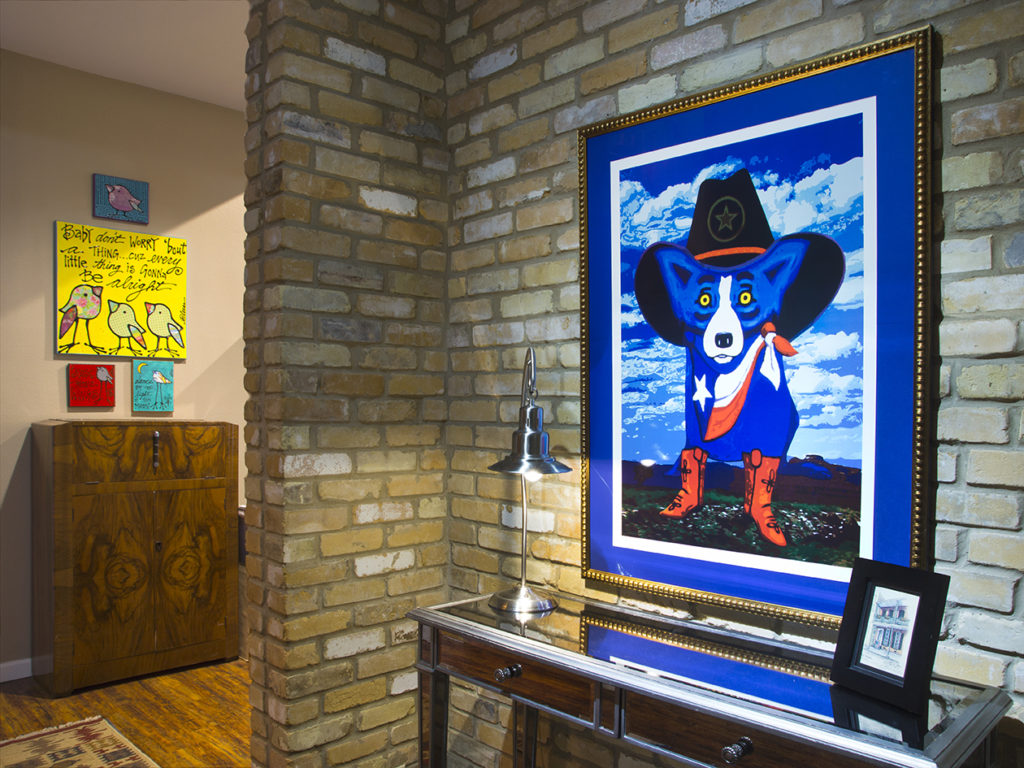 Ron Aaron Eisenberg and Gina Galaviz Eisenberg are a very special pair. At a time when most couples are enjoying grandchildren, they adopted three high-energy children who have changed their lives for the better in every way.

Ron and Gina were living in a townhome when they began considering adopting their daughter, Reagan. They knew they’d need more space, so they started looking around. What they found was a 2,800- square-foot midcentury modern garden home on a quiet cul de sac near Broadway.

“As soon as we walked in, we knew this was our house. We also thought it needed a few changes,” Gina said. “The master was downstairs, and two bedrooms were upstairs, separated by an area that would make a good playroom.”

They put their townhome on the market and sold it in 19 days. They bought the garden home and moved into it in November 2013. “We adopted Reagan shortly afterward and then in January adopted the twins, Kennedy and Carter, as infants,” she says. Suddenly the space intended for a playroom stored piles of diapers, wipes and other infant paraphernalia. 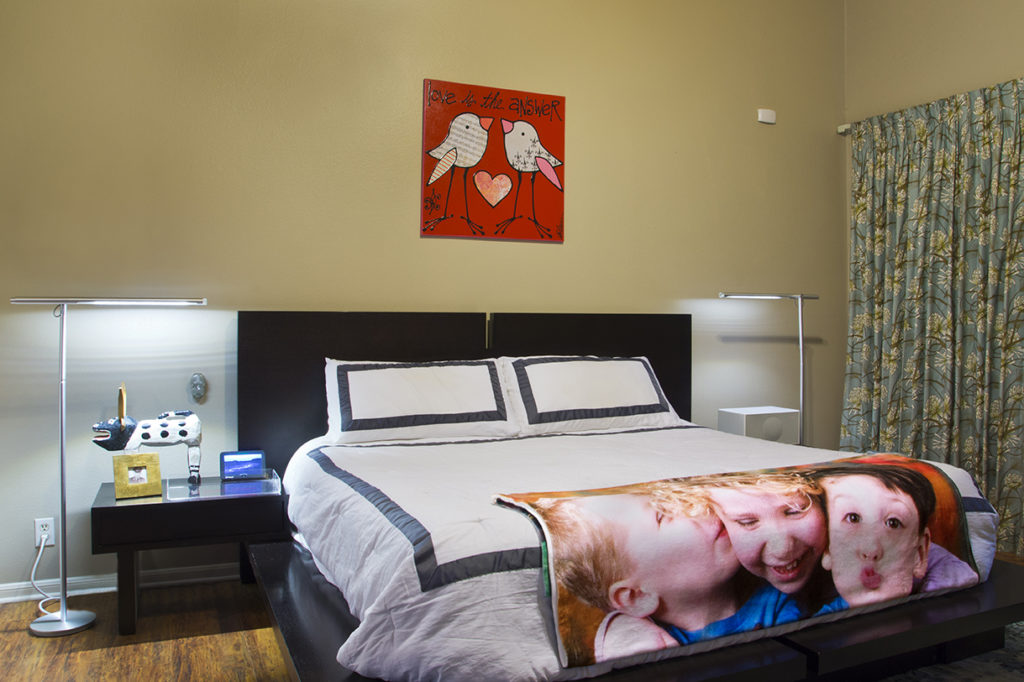 “We knew we needed to make some changes downstairs, so we watched a lot of HGTV!” Gina recalls. “We learned we need to live in a space before we change it. In the spring of 2014 we were ready to embark on renovation. We talked to a couple of contractors, and James J. Ivy was one of them. He gave us options that worked with our budget.”

“We ‘dated’ James for six months,” Ron says. “At least, it felt like that. He’d pop in occasionally just to see how we were living in the home. He wanted to see us in action so he’d be able to provide the best design plan for us. Along the way, we became great friends.”

James, Ron and Gina determined that the kitchen, dining room and atrium were their first renovation priority.

“We lived in the house during the demolition,” Gina says. “It wouldn’t have been possible except that James made sure the job site was totally clean when the renovation team left at the end of the day. They were fastidious about dust and dirt, so we didn’t worry about the children getting hurt.” 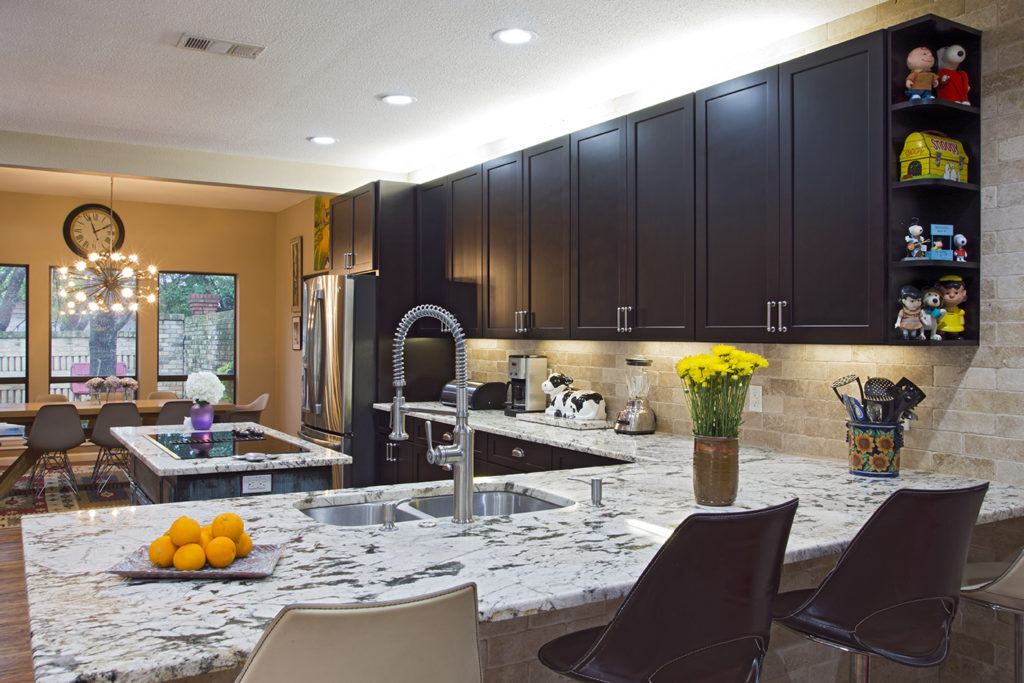 The garden home provides lots of wall space for the Eisenbergs’ art collection. Everywhere you look hang colorful paintings, prints and photographs — many of the children as they’ve matured over the last several years.

One of these art pieces is a George Rodrigue Blue Dog print, which hangs in the entry hall. “We love New Orleans and found this on one of our visits,” Gina says. It’s a happy way to greet guests who enter the home.

The space to the right of the Blue Dog was once an atrium. For Gina and Ron, it was a poor use of space. James took out a wall and French doors, and the Eisenbergs installed a special film on the windows to allow light in but protect privacy. The room now opens into the kitchen and provides office space for Gina and Ron, who work from home.

The kitchen was mostly gutted, the ceiling raised, and the wall separating it from the dining room was removed. New ceiling-height espresso cabinets were installed, as well as white granite countertops and a brick backsplash. The width of the countertop where the sink is located was extended to create a useful overhang where the children sit at barstools to eat breakfast. Recessed LED lighting made the room brighter.

The countertop on the kitchen island was extended, too, and a new six-burner cooktop installed. A stacked microwave and ovens across from the island make meal preparation quick because fewer steps are needed to get around the kitchen. Built-in drawers beside the oven keep snacks and daily detritus organized. A stainless wine refrigerator and full-size side-by-side refrigerator complete the kitchen’s appliance alliance.

The kitchen flows into the dining room, where natural light filters in from the large window overlooking the backyard. The simple kitchen table seats up to 14. It was a find at Design Within Reach during a New Orleans trip. The 24-light Sputnik chandelier over the table came from Nest. “We found that before we even moved in,” Gina says. “We had to have it. I knew we’d find the right place for it.”

The dining room flows into the living room, where a large brick fireplace rises to the vaulted ceiling. A large pastel of the children at the beach hangs there. It was commissioned to local artist Stuart Armstrong Seal. Comfortable leather chairs and a sofa, along with a cowhide ottoman, provide seating for TV watching or conversation and giggles. Art of all sizes and colors hangs on the far wall. 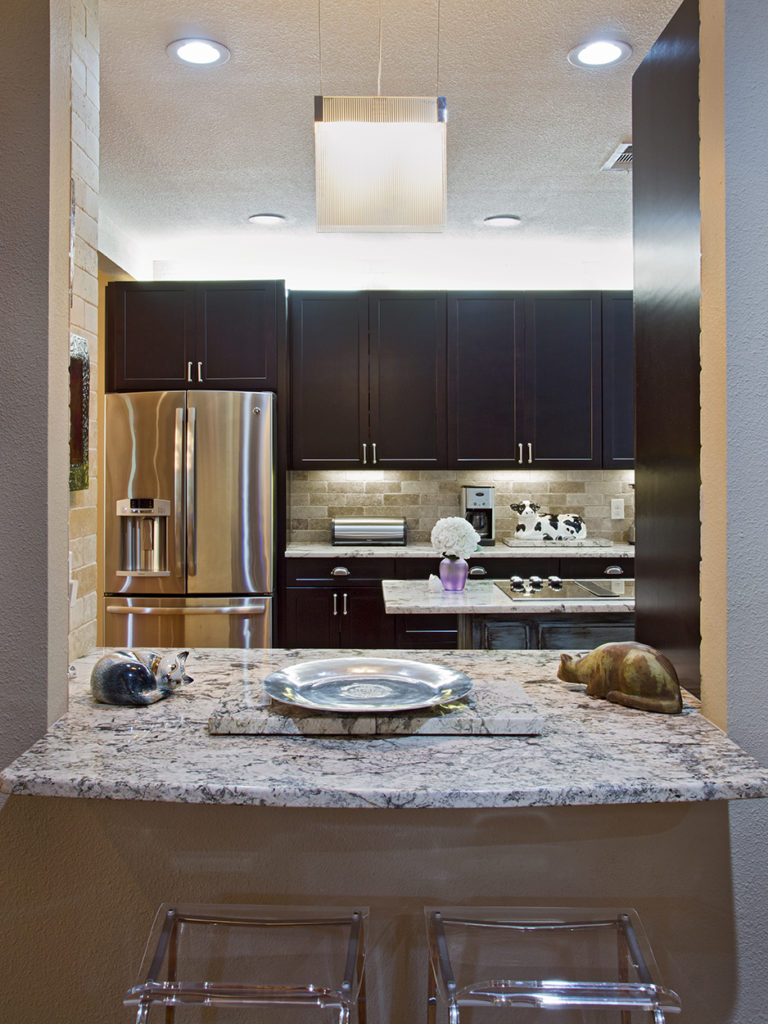 “I will tell you that James Ivy hung every picture in this house,” Gina says. “He looked at everything we had and determined where it should go. And he hung all of it himself.”

Sliding glass doors flank the fireplace, opening onto the patio running along the back of the house. Here a narrow yard provides play space for the children. There’s a small dining table and a conversation area with a fire pit for the adults. Gardenias and scented flowers ring the space, an oasis for friends visiting the busy household.

The spacious master suite lies beneath a soaring vaulted beamed ceiling. A big-screen television hangs across from the king-size platform bed sourced from Nest. Sliding glass doors open to the patio. “The kids love this bed because it’s low to the ground, and the bench around the bed gives them a good place to sit to watch TV,” Gina says.

New Orleans artist Katie Leese is a favorite of Ron and Gina’s and one of her handmade mixed media paintings hangs over their bed. Heavy draperies hide the bright sun from the room, keeping the space cool in summer. Built-in shelving with louvered doors provides storage.

French doors open into a short hallway with a walk-in closet on the right side and a mirrored sliding door closet on the left. The hall leads to the master bath, anchored on one end by a step-up Jacuzzi tub. Light filters in through glass blocks over the tub.

Ron says, “There was a door where the tub sits, opening to the outside. It was the craziest thing. A previous owner removed the door and installed the tub.”
Polished brass fixtures in the granite vanity and glass shower lend some easy-care glamour to the room. The simplicity of the two square undermount sinks complements the granite countertop.

The staircase is a beauty in honey-colored wood. The window on the landing is actually stained glass by Cecil Lang Casebier, a local artist known for the 18 stained glass windows he created for St. Luke’s Episcopal Church. A 16-light Sputnik chandelier from Houzz lights the stairway, and art lines the walls. 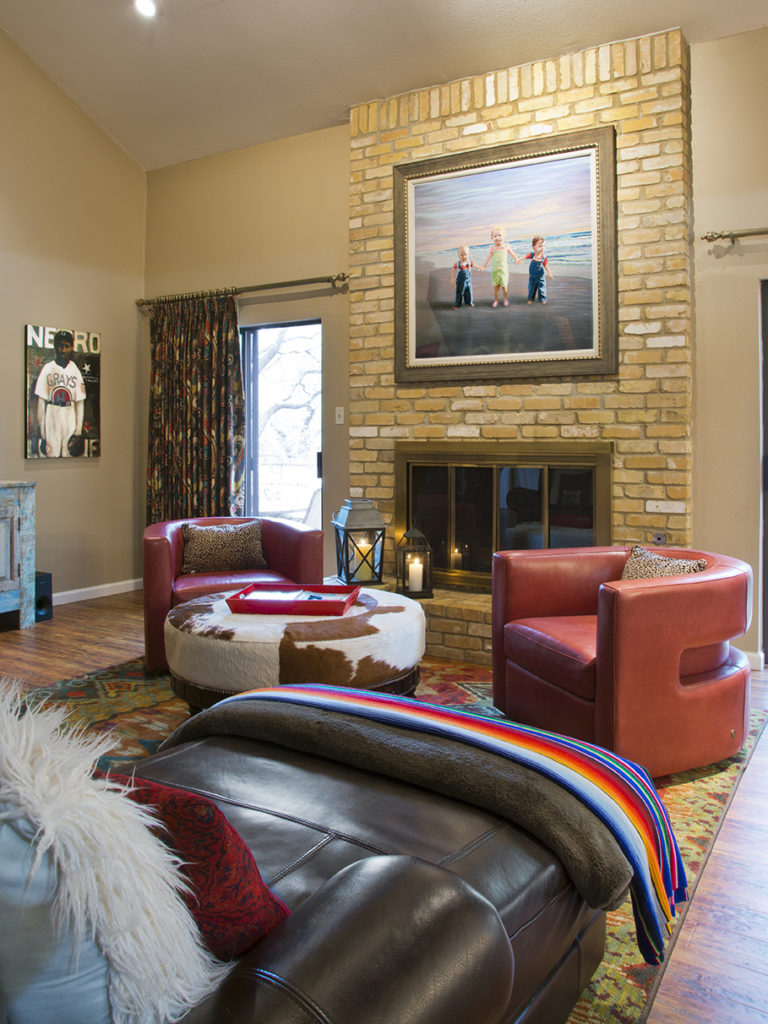 The playroom upstairs has one wall of built-in shelves, with a big screen TV in the center. The shelves are full of all kinds of toys, books and movies. A long white leather couch provides comfortable seating for someone who wants to watch video — or just catch a breath.

Reagan’s room is by the staircase. A mural of a tree is near the window on one side of the room; the Fairy Princess Cnaushua is painted over the twin bed. “Cnaushua was Reagan’s caseworker when she was an infant. She did great things for our little girl,” Gina says.

The room also contains a large dollhouse that was Gina’s in childhood. Large stuffed animals lie by the dollhouse, serving as a good crash pad for a tired child.

Kennedy and Carter’s room across the way has colorful Dr. Seuss wall murals. “Michelle Swisher painted these for us, and we’ve enjoyed them so much,” Gina says. “It’s going to be very hard to paint over them when the boys outgrow Dr. Seuss and want to express their own styles.” 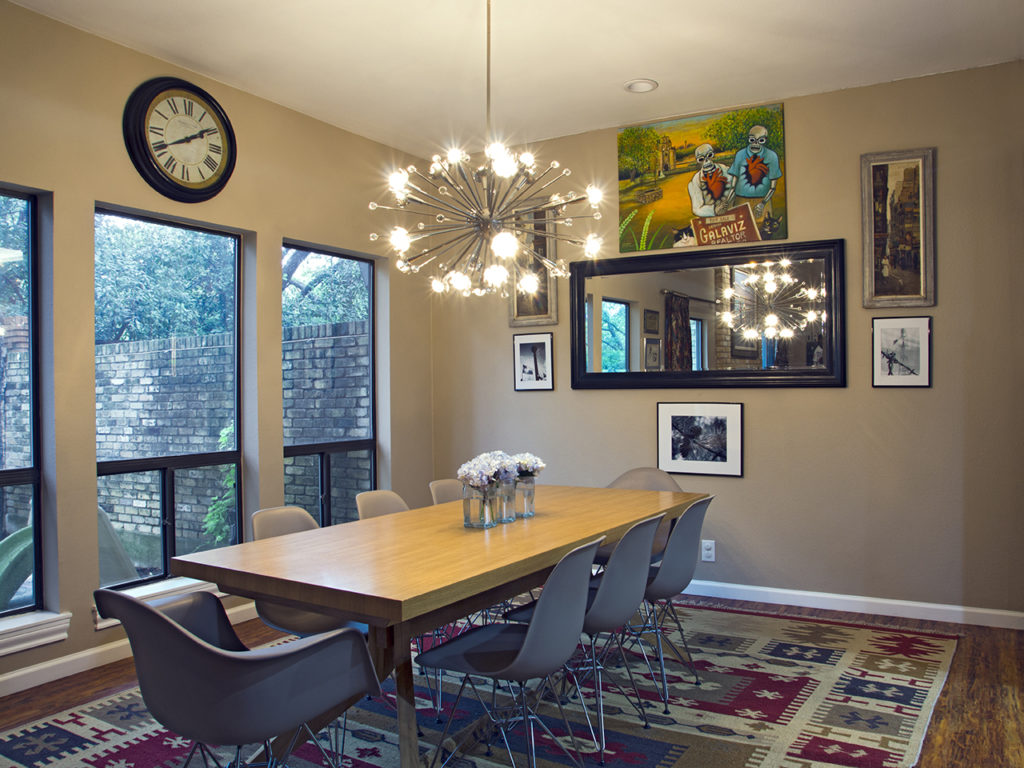 Gina and Ron agree that with three young children, three cats and a dog, theirs is a busy but happy house. “This open design works for us,” Ron says. “We like to entertain, and it’s easy to host a group here.”

Gina agrees. “When we are all downstairs, it’s easy to see what the kids are doing. They can draw at the breakfast bar or the dining table while Ron and I make meals. We can all be together in one space. It makes for a very happy home.”