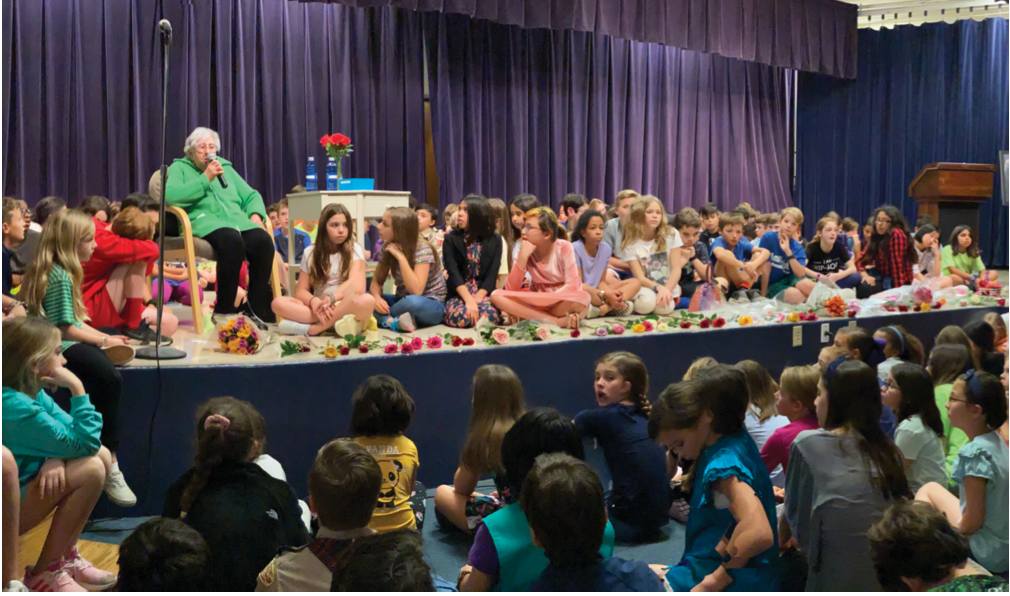 AHISD School Superintendent Dr. Dana Bashara told me, “Our AHISD Community showed up in a big way to hear from Rose and to celebrate Holocaust Remembrance. I loved seeing so many of our parents and students who all packed themselves into a standing-room-only auditorium to hear such an important message and a personal story.

“It was a night that our community celebrated kindness, tolerance, and empathy for others. This is an authentic example of the experiences we want to offer our students to grow and develop into our AHISD Profile of a Learner.”

“We estimate that we had 400 students, parents, teachers, staff and community attend the event. It was a packed house and you could have heard a pin drop as Rose was speaking. It was a powerful, historic moment.”

Among those in the audience, were the four San Antonio women who spearheaded the effort to get the legislature to pass Holocaust Remembrance Legislation requiring all Texas public schools to hold annual week-long Holocaust remembrance programs. State Senator Jose Menendez, who attended the program at Woodridge, was a key sponsor of the legislation which the Governor signed.

One of the four women is the Alamo Heights Teacher of the Year, Lisa Barry. She teaches fifth grade English, Language Arts, Reading, and Social Studies at Woodridge.

No More Drinks at Drink Texas on Broadway

Drink Texas, 8123 Broadway St., is closed. The company, which operates other bars in San Antonio, did not return multiple calls to determine the status of its Broadway location. A mention on Yelp reported the bar would re-open in April, but 78209 Magazine has been unable to verify that statement. Two other bars, adjacent to the closed site on Broadway, remain open.

The Witte Museum’s Bug Bites will take place Thursday, March 26th from 7–9 p.m. with Executive Chef Stephen Paprocki, Chef Robert Nathan Allen, and the Chef Cooperative. It will feature a variety of tasty treats made with insects, including grasshoppers, scorpions, crickets, mealworms, and more.

Paprocki, owner of Texas Black Gold Garlic, is an edible bug enthusiast. He told 78209 Magazine he eats bugs at least once a week. “Over 90% of the world eats bugs in their diet’…but the U.S. is behind the times.”

Paprocki adds, “Bugs are high in proteins, minerals, and other nutrients we need in our diet. Plus, they help reduce our carbon footprint.”
The event at the Witte will explore the “global delicacy” of inspects with more than 25 chefs offering dishes of their own creation, in the Valero Great Hall and Texas Wild Garden.

The City of Alamo Heights is spending $1.19 million to renovate the Pool at 250 Viesca St. The work was long overdue.
Pool operator Rick Shaw told 78209 Magazine, “It is the first significant improvements to the site in decades,” Shaw took over operation of the pool in 1990.

Alamo Heights City Manager Buddy Kuhn said, “The pool had leaks plus a number of other issues.” Shaw told this reporter, “It was down to us fixing it or closing it. City Council agreed and voted the money to repair the pool and grounds, modernizing the filtration system, and more, while maintaining the 1950s look patrons love.”

Kuhn confirmed the work will be done on time.

“As of now (mid-February), they are ahead of schedule and hopefully will remain so. As far as major renovations in the future, the pool plaster should be good for up to 15 years depending on pool chemistry.

“The biggest difference between the existing pool and the upgrade is that the old pool was a concrete shell with 25 layers of paint on it and the renovated pool will be a plaster finish over the existing concrete, complete with new lights. A portion of concrete decking between the pools is also being replaced due to deterioration of the 73-year-old concrete surface.”

Bottom line, get those swimsuits and floats ready. The Alamo Heights Pool will be waiting soon.

To mark its 25th anniversary at the Sunset Ridge Shopping Center on N. New Braunfels, Sunset Ridge Home & Hardware is expanding its storefront with an additional 3,500 square feet and remodeling the entire store, which will be 12,000 square feet when done.
With the expansion, the store is changing its name to Sunset & Co. It is also launching a new e-commerce website with an in-store pickup option.

The store’s remodel will include the installation of a fully functioning demonstration kitchen to allow Sunset & Co. to host cooking classes, big and small, and product demonstrations.

In announcing the remodel, Rees Doyle Peacock, Vice President at Sunset & Co., said, “The additional space will allow us to expand on our customer’s favorite categories such as gifts, while still staying true to our roots in home and hardware products.”
Amy and David Doyle opened Sunset Ridge Home and Hardware in Alamo Heights in 1995.