There are few names that resonate in San Antonio and across Texas like the name Frost. As the chairman emeritus of Frost National Bank, one of the largest and most successful banks in the country, Tom Frost is a fourth-generation banker and long-time resident of Alamo Heights. His San Antonio roots date back to 1868, when his great-grandfather, Col. T.C. Frost, founded the first Frost Bank in San Antonio.

Born in 1929 at the Santa Rosa Hospital, Frost has called San Antonio home all his life. “I am probably one of the few people you will ever know who goes to work two blocks from where they were born,” he states proudly. He laid his first footprints in Alamo Heights in 1941 as a student at TMI. Fourteen years later, in 1956, Frost and his wife, Pat, bought their first home on Rosemary Avenue in Bluebonnet Hills, and they never looked back. 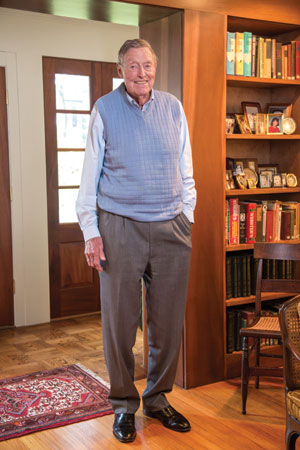 “The really interesting thing is I’ve had the same wife, the same job, the same church and the same house for over 50 years,” Frost says. “The only thing that has changed is after 52 years, we bought a new house around the corner from the old one. I’ve owned two homes in my life, and both are in Alamo Heights.” A man known for his wisdom and good decision making, he admits he had nothing to do with their decision to set down roots in Alamo Heights. “Pat picked out the house because it fit our boys and our growing family,” Frost states. “It was the house where we wanted to raise our kids. We were two blocks from the high school and six blocks from the grade school. Everything was close and convenient.” The Frosts quickly fell in love with the small-town atmosphere of Alamo Heights, where neighbors looked out for one another and where their children could mature in a safe and nurturing environment.

“It was a wonderful time of life to raise four boys in what was a wonderful small town,” Frost says. “A dear friend, Mr. Harper, ran the Lone Star Ice House in Sunset Ridge. If our boys were doing anything they shouldn’t, Mr. Harper would call and let us know,” he recalls. “I remember one time, Mr. Harper called Pat during a heavy rainstorm and told her our boys were sitting on the side of the road on New Braunfels watching the water rush by. Now there’s a small town for you!”

Frost readily admits that although that small-town feeling remains, Alamo Heights has experienced considerable growth in the past six decades. “The government seems to have enlarged significantly, and we are acting more like a larger town,” he explains. “But it is still basically a community where we are able to deal with the city government or the school district as individual people. San Antonio has grown around us, but Alamo Heights is still a relatively tight community.” 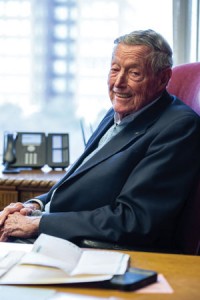 Today, Frost dedicates much of his time to the civic endeavors he has championed for years, many right here in Alamo Heights. “I have always been involved in community development,” he says. “Our whole philosophy of the bank was that we needed to help grow the community. The only way the business could grow was if the community grew. I’ve never forgotten that.”

Currently, he serves as chairman of TMI and chairman of the board of trustees of the McNay Art Museum and is on the vestry of Christ Episcopal Church, to name a few. “I’ve spent a lot of time raising money for entities for which I have had a lot of interest over the years,” he explains. “Most recently, I realized the most important element for education we have in San Antonio is UTSA, so I have been involved in capital fund raising for them, as well.”

If you’re new to Gmail getting started is easy. Learn all about setting up a gmail accountcould be accessed by someone else without you even realising it

Although Frost still goes to the office every day, his most important job these days is the one he has at home: “Family occupies a big part of my life. I am the helpmate to a professional grandmother, who is now a great-grandmother. Managing a grandmother is a full-time job in itself!” Alamo Heights is blessed to have the Frosts as long-time residents.