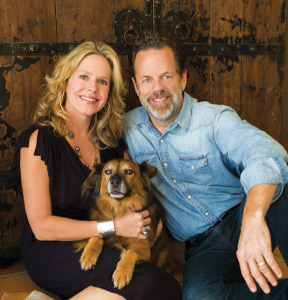 Generations of families have been coming to Langmore Photography in Alamo Heights to create their family portraits for more than 30 years. Even though Dorothy Langmore passed away more than two years ago, the business she founded in 1984 thrives through her children, Will and Marie. FAMILY BEGINNINGS Renowned photographers Bank and Dorothy Langmore graduated from Alamo Heights High School in 1953/54, respectively, and married in 1959. They lived in Dallas for several years, then returned to San Antonio in 1981 to open a photography studio near downtown. While Dorothy photographed weddings and portraits, Bank became successful photographing the American West and the cowboy in particular. His 1975 book, The Cowboy, is still considered one of the best on the subject. In 1984 Dorothy opened her own studio in the current location on Broadway, a few doors from Paloma Blanca, and built her business photographing weddings, families and her forte, portraits of women. THE BUSINESS GREW Will Langmore began helping his mother in the studio while he was a student at UTSA, and he soon became an integral part of her business, while building his own clientele. The Langmores’ second son, John, graduated from Alamo Heights in 1981. Although he is not part of the family business, his career as a corporate attorney is taking a backseat to his growing success as a world cultures photographer. It seems John is following his father’s footsteps as he is currently photographing the American West and the lore of the cowboy. John appreciates having his two talented siblings help him select which of his photographs to include in his projects. A small sampling of John’s work appears in this article. The Langmores’ third child, Marie, graduated from Heights in 1985. After she earned her degree from Texas A&M, she discovered how much she enjoyed photographing people and decided to forgo a teaching career to join her mother and brother. Now she and Will are co-owners of the business. IN WITH THE NEW There is a new age of portrait photography developing as the next generation has taken over at Langmore Photography. 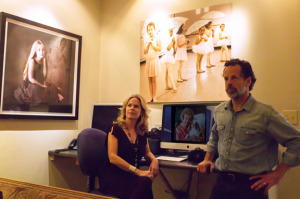 The transition to digital took place more than a decade ago, and Will says, “The possibilities are so much more flexible through digital equipment.” Will and Marie stay on the cutting edge of photo and printing technology using computers and printers that produce the finest in small to very large prints. This is a time of year for celebrating family and updating family portraits, and it can be a busy time for the Langmores. There is a recognizable continuity in the portraiture from one generation to the next, even though this generation of Langmores uses twenty-first century equipment and more relaxed settings. Their studio still has a few of their mom’s backdrops for portraits, including a large blue painted antique Spanish mission door and a Victorian chaise longue. They are near a large window where the light streams in, allowing Will and Marie to produce natural light portraits. What Langmore Photography offers are works of art. Dorothy had a style that was often compared to impressionist paintings — a softness, which Will and Marie still use today among other techniques, bringing a fresh and creative approach. DOUBLE EXPOSURE Will and Marie often work as a team. They have complementary talents and work well together. There is a friendly sibling dynamic that plays out during these sessions, such as shooting the same scene from different perspectives. Their collective creativity is evident in the results. Will says, “Something special occurs during a photo session. It’s very much like an athlete getting in ‘ the zone.’ Will and Marie acknowledge there is a certain point when something clicks. It happens when the people they are photographing relax and there is a gleam in their eyes, a dimple appears, a glance, an interaction between two children, or a husband and wife share a look. That’s when a ‘moment’ is discovered. Will and Marie both have sensitive yet light-hearted traits which put even the most camera- shy people at ease, making it fun to have their picture taken. They avoid a posed look while keeping the groups contained for that perfect scene. ARTISTIC PURSUITS The Langmore Photography business continues to evolve. It can be a challenge for these two artists to find time for their individual projects. Will and Marie’s interests grow and progress as their passions change with each inspiration. Will shows his love for San Antonio by exhibiting a refined ability to tell a deeper story through his photography. He is currently involved in a project which presents the West Side community with all of its scarcity and vitality. Another of Will’s ongoing projects is photographing identical twins. He is interested in capturing the similarities and differences of two alike individuals through the camera lens. The culmination of the first year was an exhibit featuring 30 images. In 2010 Marie began working with Haven for Hope on a project documenting Haven’s incredible impact transforming the lives of those suffering from homelessness. The project allowed Marie to explore an entirely different aspect of photography while still drawing from her many years spent photographing people. Marie’s current project, Women and their Dogs, is being published this month. It seems Marie is following in her mother’s path. Dorothy was awarded for her photographic series, Women of Distinction. The Langmores look forward to presenting a compilation of their work to include Bank, Dorothy, Will, John, Marie and Will’s son, Milo. Yes, the Langmore legacy continues. Milo, who attends Alamo Heights Junior School, has already won an award for a photograph he took using his dad’s camera and says he “wants to be a cowboy and a photographer—like grandpa”.The apple doesn’t fall far from the tree.