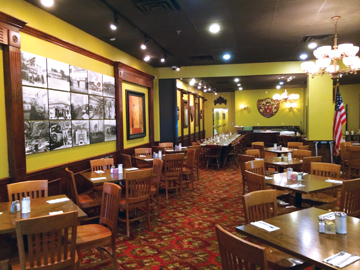 You will be happy to know, if you don’t already, that despite moving from its iconic Broadway location some years ago, Earl Abel’s still has its fair share of character—including the indelible, chatty-quirky waitresses. Some of them may be the same, for all I know.
Even if you weren’t a fan of the equally iconic fried chicken, or the prodigious pies, or of Thursday’s Salisbury steak (who else does this, after all?), you’d still have to admit that service from a waitstaff that’s not cookie-cutter interchangeable is reason enough to pay old Earl a visit. If it’s on a Wednesday, you can even have the meatloaf.
Served with a Creole sauce that’s anything but dainty, the meatloaf is everything it should be: rustic, robustly flavored and generously portioned. There are more than a dozen available sides, and as two come with each daily special plate, feel free to go wild; if beets and mac and cheese are your secret passion, we won’t tell—but we will suggest that at least once the sautéed cabbage ought to be tried; it’s porky and still a little crunchy and reminds at least some of us that there’s virtue to be had in not overthinking a recipe. The baked “yam,” served swaddled in aluminum foil, is perhaps the epitome of that approach, but if you add a pat of the butter that comes with your yeasty dinner roll, it will all go down nicely.
If dishes such as calf’s liver and onions and Sunday’s roast turkey and dressing have endured at Earl’s over the years, there have been a few changes to mark the passing of time: the addition of both an Akaushi beef and a bison burger is one of them, and it’s also hard to imagine that Earl would have featured fish tacos or gyro wraps in his day. We did experiment with fried pickles as an appetizer and found them fine of type. In any case, this is as good a time as any to admit that we really come for the pies.
You will be happy to know again (if you don’t already) that Earl’s pies remain the standard by which all classics are judged. Lofty and light, the coconut meringue never fails to please—unless it’s the lemon meringue that gets the nod. Oh sure, there’s black bottom pie and even German chocolate cake to tempt, and they have also probably been on the menu since 1933. But there’s just something about meringue… 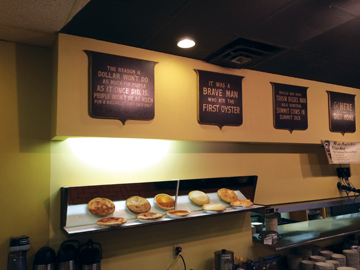