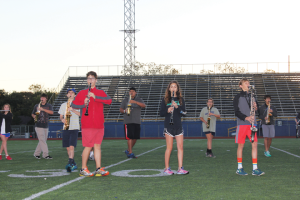 THE ALAMO HEIGHTS BAND COMPETES, FUNDRAISES, PERFORMS AND MAKES PLANS FOR A TRIP TO HAWAIIAHHS band students, led by directors David Stephenson and Amber Metzner, are preparing for upcoming competitions and fundraising for their annual band trip. “I love being in band,” sophomore Justis Rendon said. “I love having the opportunity to go to places I have never been and creating a bond with new people.” Each year the band takes a trip, and every four years they travel to Hawaii. This year, the band is going to Hawaii during spring break as a reward for their hard work and dedication. The band is composed of different sections based on the instruments played. Along with sections, some students have the opportunity to become band leaders once they are upperclassmen. “To become a band leader involves a lot of aspects,” junior Bea Johnson said. “You have to be at all practices on time, always correct things you see wrong on the field, keep up your grades and help with all events outside of normal practice time. Every band leader must be dedicated to band.” 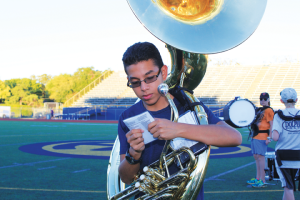 The band competes in competitions throughout the school year, including marching band competitions during the fall. They also participate in University Interscholastic League contests in the spring in which students compete in the sight-reading and solo or ensemble contests. Band members are also given the opportunity to audition for All-Region Band. “Every band member is allowed to audition for All-Region Band,” Rendon said. “All-Region Band is always really fun because all of the band members are good at playing their instruments.” Band has already competed in three competitions, including the Lone Star Classic held on Nov. 8. They also earned a two at the UIL competition, with one being the best score and five being the worst. In total, band competes in five competitions throughout the year along with the individual contest. “Band competitions involve all band members,” Rendon said. “Competitions have the band play their music, and they also involve lots of pizza.” Throughout the year, band students participate in numerous volunteer activities, including the annual Run to the Beat, the March Through Heights and marching in the Battle of Flowers Parade. “My favorite activity is the March Through Heights,” junior Lauren Liebmann said. “It is when 120 band members show up at your door and play songs for you. It also helps the band program raise money.” “I am so excited to go to Hawaii this spring break,”she said. “I have been looking forward to this trip since I was a freshman, and I am excited to travel to Hawaii with all of my friends.” Band students’ fundraising events help raise money for their competitions and trips. “We hold multiple fundraisers throughout the year,” Johnson said. “We sell cookie dough in the summer, march throughout the neighborhood playing music in the fall and hold tamale sales in the winter.”

NEW SERVICE PROGRAM – SNAK PAK 4 KIDS
St. David’s Episcopal School has partnered with Wilshire Elementary to begin a new service program called Snack Pak 4 Kids. Each week, St. David’s provides weekend Snack Paks that are sent home with 97 students of Wilshire Elementary. These students have been identified as being reliant on school meals as their main source of nutrition. They are not getting sufficient food outside of school on a regular basis and are chronically hungry, which leads to a multitude of other problems. Through Snack Pack 4 Kids, St. David’s students help end weekend hunger for kids at Wilshire. To date, St. David’s students have provided over 2,000 weekend Snack Paks. In December, when the Wilshire students didn’t have the stability of school meals to rely on for the holiday break, St. David’s packed and delivered 480 Snack Paks.
READY, SET, KINDERGARTEN
They say everything you need to know you learn in kindergarten. Parents can find out why that’s true at St. Luke’s Episcopal School’s Ready, Set, Kindergarten event taking place on Feb. 17 at 6:30 p.m. Parents will meet teachers, become informed about St. Luke’s Episcopal School’s curriculum and explore the wonderful world of kindergarten. For more information, please visit www.sles-sa.org.

MACARTHUR STUDENTS HELP HABITAT FOR HUMANITY
MacArthur High School’s Electrical Systems Technology (EST) students spent Jan. 14 putting their lessons to work in the real world for a great cause, Habitat for Humanity. “I feel like I’ve accomplished something,” said junior Sigalit Soriano. “I like helping other people.” About 50 students worked on three houses in a West-side community. Most were juniors or seniors with several years of training under their belts. They spent the day doing rough-in electrical work to get the houses ready for inspections, working with their teachers and professionals who also volunteered their time. “These students are doing good work,” said Jesse Aguilar, owner of Platinum Electric. “You have a really good program [at NEISD]. I wish I had this when I was younger.” EST teacher Victor Casares says this is a good opportunity for the students to get out and work with Habitat. It is the first off-site project for the year, and students get to see what it is like working with a real contractor for a full day. “Everyone has come a long way since freshman year,” said junior Adriana Avila. “This is a great experience.”