A FUSION OF FLAVORS IN A HIP SETTING 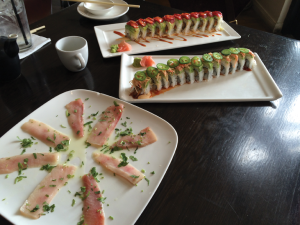 There’s nothing like strolling into a popular restaurant, in an equally popular retail strip, at the end of a Friday happy hour and immediately finding plenty of seating.
Such an event may have been an anomaly for Piranha Killer Sushi at the Quarry Village. Regardless, it was a good beginning. Plenty of available seats could be found around the main bar, the sushi bar and the general dining area. In short time, a young waitress took my drink order. Passing on the array of red and white wines and martinis, as well as the small selection of beers, I chose the house sake. There’s a good amount of sake to be had. This choice was solid if not spectacular.
For the most part, the appetizer list is reasonably priced — standard for restaurants similar to Piranha. More often than not, the vegetable tempura enables the flavor of the fresh vegetables to be prominent, especially when served with the accompanying light-bodied sauce. The signature rolls at Piranha are known for their uncanny names, such as the ‘Marry Me’ and the ‘Love at First Sight.’ Many of the rolls are tasty and are a very contemporary fusion of sushi and reflective of regional tastes. This isn’t for everybody, especially diners who are very strict about their preferences in sushi. For example, cream cheese is used in most of the signature rolls. It’s definitely not something familiar to sushi purists. The Latino Roll, a blend of shrimp tempura, asparagus, ginger cream, cream cheese, avocado, crab jalapeño and cilantro, is always sharp but never overwhelming. The tri-color sashimi roll, complete with tuna, salmon, white tuna, chives, crab and cucumber, comes in a nice presentation. Ingredients are well balanced. It could have come with a tad more wasabi on the side, though.

The list of entrees is not huge and may seem pricey, but the dishes are often filling and very tasty. But again, expect a unique experience at Piranha from other sushi establishments you may have patronized in the past. For example, the Pad Thai shrimp is more like a spicy noodle-type meal.
The dessert list is adventurous. The tempura ice cream is delicious. All during my stay, my waitress was very attentive, even as the sun began to set and the dinner crowd quickly filled up the restaurant. The sushi bar chefs stay busy, flashing fleeting smiles at the new arrivals.
Can’t get a seat inside? There’s plenty of covered patio seating outside. The interior is primarily brown and white, a warm, inviting, contemporary mix. The television sets above the regular and sushi bars, combined with the indie/modern music streaming in the background, sets a good vibe for families as well as the hip young urban crowd that dined when I was there.
Diners wanting a sushi experience and hoping to mix it up a little with a fusion of flavors from around the Pacific Rim likely will not walk away disappointed.