A LIFETIME OF INVOLVEMENT 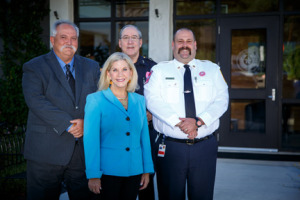 To say that Anne Ballantyne — Terrell Hills’ long-term resident, proponent, politician, parent, grandparent and “just good neighbor” — has spent a productive lifetime simply being involved is indisputably an understatement. One look at her selfless contributions over the past 35-plus years, not only on behalf of her beloved city but to various area institutions, organizations, charities and other undertakings, illustrates the degree of generosity inherent within this very gifted and giving individual. In typical Ballantyne fashion, Anne has once again assumed a new role and new responsibilities dedicated solely to the benefit of others, that of mayor of Terrell Hills – a nonpaid position that she, as evidenced by her many past accomplishments, is perfectly suited to assume. You go, girl! After her birth in downtown San Antonio at the venerable Nix Hospital, it was only a few hours later that she (accompanied by her proud parents) came home to Terrell Hills. Seemingly, she’s been there ever since. As a 60-year resident of the Hills, she has lived, at various times, at five different neighborhood addresses. When asked about this propensity for “staying put,” Anne happily volunteers, “I guess you might say I’ve got Terrell Hills in my blood. Moving away would be too weird.” She and her husband, Steve, have been in their current house for the past 31 years. Her brother, Glenn, lives around the corner. Two of her three kids (and her first grandchild) live in the neighborhood, with the third nearby, in Terrell Heights. All attended Alamo Heights schools. Yep, this family is pretty well anchored in TH! As a young woman and new mother, Anne temporarily joined the family oil business. As she admits, however, “It was fun, and the experience was great, but I just needed more.” With a thirst for “joining in” and helping, she found volunteerism fulfilled that need. While successfully handling the many duties of raising a growing family of three active youngsters (Patrick, Katy and Brian), Anne somehow found the time and energy to give elsewhere – lots of elsewheres! An overview of her commitments past and present is a testament to her abilities and desire to help. A veteran member of the Junior League of San Antonio, Anne has held multiple board positions, including that of treasurer, where a sharp mind and attention to detail were key. The Battle of Flowers organization has benefited from her participation, where again she served as treasurer and then later as parade chair and president. And with her own children as inspiration, she was an elected member of the Alamo Heights School Board, serving for nine years. More recently, as a breast cancer survivor, Anne was voted president of the Susan G. Komen San Antonio organization. She and Steve co-chaired the 2010 Race for the Cure. And if that weren’t enough, she is currently on the board of the Military and Civilian Club, an organization that fosters patriotism and helps integrate the armed services into civilian communities. But the mayor of Terrell Hills too? You bet. After her long stint on the school board, she ran and was elected to a seat on the Terrell Hills City Council. That was in 2002. Prior to that, she had also served the previous council and the citizenry with positions on the city’s Board of Adjustments and the Planning and Zoning Commission. As she recalls, “These were wonderful learning experiences that prepared me well for my seat on the council and ultimately allowed me to positively impact the direction our municipality was taking. Then, getting on the actual council expanded that role.” When the former mayor decided not to run again this year, Anne, urged on by many of her friends and neighbors, decided to throw her hat into the ring. Filled with gratitude and excitement after a competitive race with another highly qualified councilwoman, Anne proved victorious and began her tenure as the new city head. Since assuming office, she finds her days are even fuller. Working with a talented and focused professional staff, including the city manager, police chief and other departmental heads, Mayor Ballantyne tackles the ongoing challenges that confront any city leader. Backed by this supportive and competent staff as well as the city council, Anne acts as any CEO would — guiding, directing, prioritizing. And she’s very good at it. When queried about some of her quality-of-life-related goals beyond the overriding responsibilities of maintaining streets, getting the garbage collected and providing ample fire and police protection, she responds, “ My other objectives involve working to beautify the city by improving our recycling efforts, enhancing our common green spaces and reviewing our governmental ordinances to help eliminate unsightly and dangerous nuisances.” But perhaps what people appreciate most about Anne in any of her political and nonpolitical endeavors is her accessibility and willingness to listen and work with all those involved. Somehow, she makes it look easy and natural when responding to a constituency that’s looking for help – whether large in scope or very immediate. These traits and abilities serve her well as she continues to serve so many others. It’s no wonder she keeps getting called upon again and again. What is wonderful is that she keeps saying, “Yes, I’ll do it.”