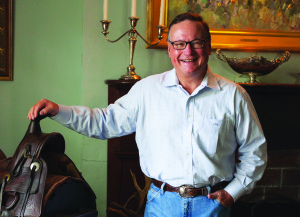 Every community has its “favorite sons,” those rare individuals who, by their extraordinary actions, accomplishments and contributions — almost always enhanced by a winning personality — have been embraced by the whole as representing the best of “one of our own.” In Alamo Heights, and the Alamo City for that matter, one exceptional example is none other than the much beloved, involved and seemingly tireless Lukin T. Gilliland, Jr. As a diversified and outgoing friend-to-all political activist, athlete, rancher, restaurateur, horse racing enthusiast, charitable benefactor, socialite and very eligible bachelor, frankly it’s surprising that all of Texas hasn’t tried to lay claim to him, but hands off, pilgrim … he belongs to ‘09! Although Lukin was born in Memphis, his mother’s hometown, as he relates, “It only took two short weeks for this newborn to get to Alamo Heights.”

He’s lived, with few exceptions, in the neighborhood ever since. As proof of his family’s provenance, the Gillilands have been a well-established and much-respected clan in the area with deep roots that amazingly stretch back to 1838, when his great-great-grandfather first settled in Texas. The ranch he founded 145 years ago in Floresville is still a treasured family property that Lukin, along with other family members, helps oversee today. Regarding the Alamo Heights connection, Lukin’s current home in the heart of the old city was once a dormitory for the Lukin Military Academy, built and established by his great-grandparents in 1922.

Later it became his grandparents’ house, where his father, the late Lukin T. Gilliland, Sr., grew up. After the death of his grandmother in 1982, Lukin, Jr., appropriately enough, assumed ownership of the old Gilliland property and spent the next year carefully restoring the beautiful and significant structure. Today, it’s a modern and comfortable residence that he, along with his beloved Lab, Mija, happily call home. Wow, that’s some history! Growing up in ’09 (in houses on Evans Street and then later on Argyle Street), Lukin proved to be an excellent student within the public school system while also excelling on the football field.

As he recalls, “I played continually from elementary through high school. I loved the game.”

After graduation, Lukin headed to Austin and UT, where, as a walk-on he made the Longhorn football team, at that time coached by the legendary Darrell Royal. In 1971, Lukin realized a personal dream as the Longhorns captured the national championship. But life at the university wasn’t all “gridiron.” The heady world of politics was soon introduced when a fraternity brother coaxed Lukin, who would go on to earn a degree in government, into joining the U.S. senatorial re-election campaign for Ralph Yarborough.

That was in 1970, and as he readily admits, “Although it meant stuffing a lot of envelopes, I quickly developed a passion for public service.” The fired-up young student later went on to work for George McGovern during his presidential run in 1972. It was during this time that Lukin first met Hillary and Bill Clinton, both third-year law students at Yale. He’s remained involved with them and other Democratic candidates personally, professionally and politically ever since, usually handling fundraising and/or organizational issues within Bexar County and neighboring areas. The now committed “old pol” is already involved in the current 2016 contest and, in his words, “looking forward to the action.”

On a more personal note that reflects his belief in, and importance of, the system, in 2006, Lukin tossed his own hat into the ring when he ran for the congressional seat from the 23rd District. Although he lost that contest, he subsequently helped a friend defeat the incumbent. The entire process proved to be an incredible learning experience, where, in typical Lukin fashion, he gave his all. Beyond his political involvements, which included helping introduce pari-mutuel horse racing to Texas (he was appointed by Governors Ann Richards and George W. Bush to the role of vice-chairman of the Texas Racing Commission), Lukin has also established himself as an extraordinary businessman in the challenging world of developing and operating restaurants. Always professionally eclectic, in 1983, he and a lawyer friend had an opportunity to become franchisees of the then up-and-coming Black-eyed Pea restaurant chain.

They selected Denver as their first territory and went to work. With no previous experience in the food biz, he and his partner went on to develop and then sell 29 Black-eyed Pea eateries throughout Colorado, Arizona and the Kansas City area. Lukin and his partner now focus on their own concept restaurants, including Elway’s Steakhouses (in league with former Denver Bronco quarterback John Elway) and Hacienda Colorado Mexican Restaurants. Closer to home, he briefly owned and operated ‘09’s favorite watering hole, the Broadway 50/50. When not at work or politicking, besides hiking, hunting, riding and golf, Lukin has another surprising side. He writes poetry. Hoping to someday be published, he continues to submit his creations to various publications for consideration.

And aside from his own works, Lukin has always been an ardent supporter of all the arts. With so much on his plate, the energetic Lukin still finds time for a variety of other worthwhile commitments, including board positions on the San Antonio Library Foundation, the Cibolo Nature Center, the Texas Lyceum Association, the Texas Leadership Institute and the Nature Conservancy. Most recently, he was elected chair of the local chapter of the World Affairs Council. With so much accomplished in so many areas, it’s easy to see why the likable Lukin T. Gilliland, Jr. truly remains one of 78209’s favorite sons. Not only is he gifted, productive, generous and personable, but as all will attest, just fun to be around too!