SEASONALLY RESPONDING TO OUR FIRST RESPONDERS 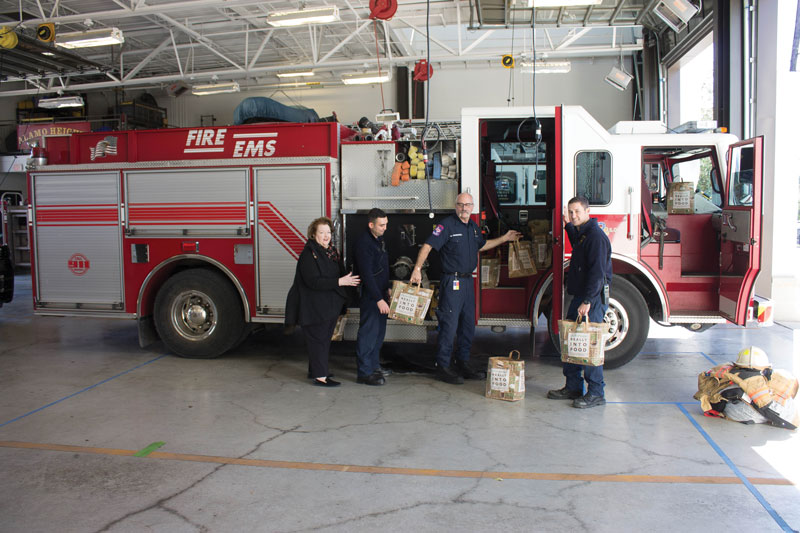 Being “home for the holidays” has always been one treasured aspect of our seasonal celebrations. And, during these happy occasions, time spent with loved ones, while always precious, becomes even more special. But when duty calls, maintaining that immediate proximity to hearth and family can suffer as other, often essential, responsibilities require fulfillment.

Recognizing the plight of those who, through an honored commitment, make such personal sacrifices, ‘09’s lifelong resident, Maggie (Tips) Houston has made it her mission to soften the separation by annually providing some tangible and very tasty treats for some of our community’s most worthy members. Focusing on the Alamo Heights and Terrell Hills police and fire departments, this not so secret Santa, along with her indispensable elves and a lot of community support, has ensured for more than 30 years that a little Yuletide yumminess (complete and delicious multi-course meals) makes it into each station house every Christmas Eve – and, this December 24th will be no different! Can’t you just smell the roast turkey and dressing? 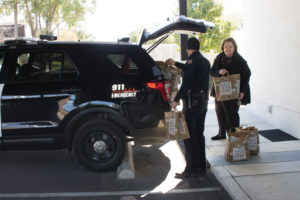 Houston has been in the neighborhood almost since birth. She, like a lot of us, was born at the downtown Nix. Starting first in Alamo Heights then, as an older child, relocating with her family into Terrell Hills and, for the past 38 years, now back in Alamo Heights living near her old alma mater, she truly is nothing less than a genuine “78209 lifer.” As a member of the respected Tips clan, after college and while married with two adored sons, Houston divided her early adult years primarily between home and working with her family’s business. Currently, she remains independently active in the marketing field serving a diverse list of local clients. Throughout her productive life, however, she has always found the time for many non-professional involvements such as her meal distribution program. She also supports multiple children’s charities and is a long-term member of the Battle of Flowers Association among other organizations. Basically, as she maintains, “I feel it’s important that we all give something back to the community that’s given so much to us.” And to Houston, that means our responders eating well on a holiday.

But, how does one get into the business of making sure holiday-scheduled police personnel and firefighters get some special fare during those often unpopular shifts? As she recalls, “For me, it all started after I realized just how much we rely on these neighborhood heroes. As an example, one day in 1985 I called the AH fire department when our pet lab got stuck under the fence. Rather than laughing, they responded quickly, dug our pet out then wished us all a nice day. That really impressed me.” Some months after that telling incident, as Houston was preparing her much anticipated family feast for their Christmas Eve dinner, she remembered that “dog rescue.” Knowing she was making much more food than her family could possibly consume, Houston thought about those “heroes,” police and firefighters, some of whom would be spending the 24th and 25th snacking on the job without their families. Inspired at that point, she called the department and offered to bring over some of her surplus (and savory) home-cooked cuisine. As she recalls, “The dispatcher got so excited and, because it was so cold on that day, he quickly offered to send a city vehicle to pick the food up.” Were those gifted groceries well received? “You bet,” says Houston but, as she found out later, “I only provided enough for one shift. Not everyone could eat.” After becoming aware of the situation, she made sure future distributions would never have that problem again. 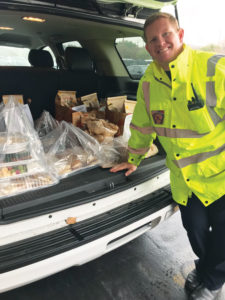 Initially, Houston was a “one-woman” show, preparing and paying for all of the food with the assistance of her two young sons. But good things have a way of growing, and soon, especially after adding the Terrell Hills departments in 2004, a host of generous donors eagerly joined in, eventually allowing for the purchase of the meals rather than the previous home-preparation arrangement. Today, with Houston supported by many other committed volunteers (special kudos to fellow ‘09ers Barbie O’Connor and Jean Parsons), appreciated funds are raised throughout each city that ultimately go to the ZIP’s Central Market on Broadway, who now, thankfully, handles all of the cooking. Also, as an inevitable outgrowth of this laudable program, Thanksgiving and New Year’s Eve and Day have been added to the program’s meal schedule as well. Could other holidays be in the offing?

So, if you happen to be driving past Central Market this Christmas Eve and notice some official “black and whites” or fire trucks, all manned by some pretty happy and hungry looking uniformed folks, rest assured that they will all be eating well for the next day or two thanks to the seemingly tireless Maggie Houston and her remarkable team of caroling cohorts. This lady and her friends really do know how to respond to our first responders. Roger that!