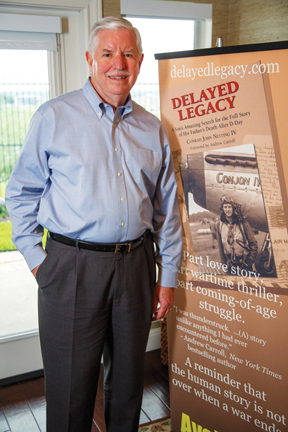 It took Conrad John Netting IV 50 years to really “know” his father. The successful Alamo Heights-based CPA and long-term 78209 resident, born in 1944, six weeks after the combat death of his father, Conrad III, grew up with a few photographs, his mother’s remembrances and the knowledge that this man he never knew was buried in an American military cemetery in France. Then, thanks to the contents of a dusty footlocker, this son received a delayed legacy that unraveled the mysteries of who his father was, an intense love shared briefly between a husband and wife and, ultimately, how a fighter pilot earned the gratitude of a small village half a world away. With the passing of Conrad’s mother, Katherine, in 1993 came the inevitable duty of sorting through her possessions. It was during this activity that he discovered the olive drab military footlocker (bearing his father’s name) in the rear of his mother’s Olmos Park garage. He took it home. The unopened locker remained sealed until July 4, 1994, when, with gathered family watching, an emotional Conrad forced the box open, revealing an interior carefully packed with 50-year-old uniforms, notebooks, medals and other items dating from the United States’ involvement in World War II. These preserved relics represented a direct link to his late father, Lt. Conrad J. Netting III, Fighter Pilot, U.S. Army Air Corps. The uniforms, medals and other military items were important to Conrad because they belonged to his father. Especially poignant was the young lieutenant’s flight log with a final entry (dated June 10, 1944) from a comrade detailing the crash of Netting’s P-51 Mustang after a dramatic strafing of enemy fuel trucks. Treasures of equal value, however, were the many personal letters the trunk contained — hand-written daily correspondence his newly wedded parents had sent back and forth five decades earlier. All chronicled the deep relationship the two had shared. Reading these letters and handling the military materials provided Conrad with a unique window back in time and a special insight into the man his father was. From the correspondence, Conrad grew to know the personal and private side of a loving husband and eager father-to-be. The enclosed medals and military documents established his father as a brave and honorable man. It was eventually a letter from France, however, that completed the picture. Conrad discovered that his father was also a hero. That letter arrived eight years after the opening of the old footlocker. It was postmarked from the small village of Saint Michele des Andaines in Normandy, France, and was written by Sylvie Grandin. The Frenchwoman was writing on behalf of her father, Michel, who had been searching for information about a “brave American soldier named Conrad Netting.” Sylvie’s father was a child when Netting crashed near the village. Her paternal grandfather recovered the body and (at risk because of the German occupation) constructed a coffin, organized a funeral and interred the deceased that night in the cemetery. The downed pilot was hailed as a hero for his attack on the German fuel trucks — fuel that was destined to be used against the French population. Since that crash the name Conrad Netting has been revered in Saint Michele. After reading the letter, Conrad IV now realized “what town my father died in, that he had a Christian burial and that he was lovingly and compassionately cared for at the end.” Comforting news (albeit late in coming) and greatly appreciated. Complete closure came with the Netting family traveling to Saint Michele in June of 2002—a few days from the anniversary of D-Day—to meet the Grandins and attend a ceremony where a plaque was dedicated honoring Lt. Conrad J. Netting III for his sacrifice benefiting the village, France and the entire free world. As Conrad IV remembers, “At the end of the ceremony, everyone turned toward the plaque and the flags above it — the American banner at the peak, two French tricolors at its sides. Fully expecting to hear the Marseillaise, the French national anthem, I was stunned to hear The Star-Spangled Banner. The crowd audibly caught its collective breath, and a quick glance revealed a tissue in nearly every hand.” Conrad’s wonderful story of discovery is emotionally chronicled in his self-authored book, Delayed Legacy, and is available for purchase at www.delayedlegacy.com. Conrad continues to be a sought-after speaker sharing this special story to appreciative audiences throughout San Antonio. He has just completed another trip back to Saint Michele.