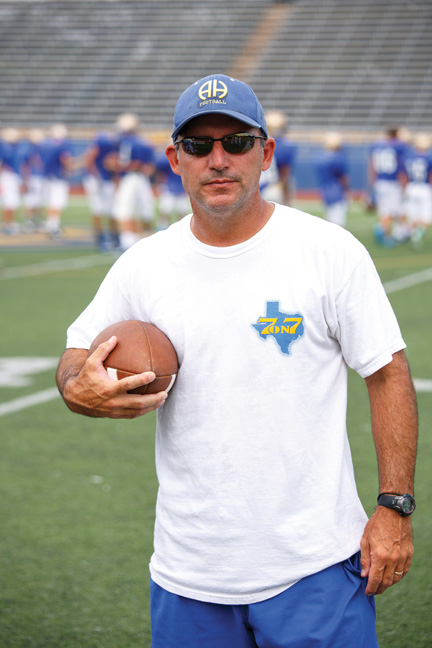 To say that high school football in Texas is just another sport is like saying the Pope is just another Catholic. There are few things that Texans love more than a good high school football game, and there are few things ‘09 residents love more than to watch the Alamo Heights Mules take to the football field. As offensive coordinator for the football team, coach Randy Osborne has been a part of the Mules football fever since 1998 and was part of the state championship win of 2006. “I will never forget Broadway being lined with thousands of people from Alamo Heights after we won the game, “ he reminisces. “Receiving phone calls, emails and letters from Alamo Heights alumni, some who had graduated more than 40 years ago, was an unbelievable experience that I will cherish forever.” The son of the head football coach at MacArthur High School, Randy has football in his blood. After graduating from MacArthur in 1988, he played the sport for four years while earning his undergraduate degree from East Texas State University (now Texas A&M Commerce) and stayed and coached as a graduate assistant for another year before moving back to San Antonio to accept a coaching position with Bradley Middle School. While at Bradley, he worked with Mike Norment, now the head coach at Alamo Heights. It was Norment who encouraged him to apply for his current coaching position, and he has never looked back. “The thing I like most about living and working in this community is the convenience of big city living with a small town feel,” he says. “I love the fact that we have two elementary schools, one junior high and one high school. I think this creates a close-knit environment unlike any other in San Antonio.” Randy, who also teaches math and is the head coach for the boys’ track team, is not the only one who has embraced the Alamo Heights lifestyle. His wife, Nicole, also a MacArthur graduate, is an English teacher at the Junior School and coaches the tennis team. The Osborne sons, Jake and Colton, transferred to the Alamo Heights schools when they were in seventh and fourth grades, and both have followed in their father’s cleats by playing football and running track. Jake, the older, graduated from Alamo Heights in May of 2014 and was an all-district receiver for the Regional Finalist football team. He now attends Texas Tech, while Colton is beginning his sophomore year at Alamo Heights. “Having my entire family in the Alamo Heights school system has truly been a blessing,” says Randy. “It has allowed my wife and me to be much more involved in the boys’ academic and extracurricular activities.” Those extracurricular activities extend beyond the doors of the Alamo Heights School District to include involvement in the community at large. The Osbornes are active members of the New Heights services at Alamo Heights United Methodist Church, and Colton is a member of the Young Men’s Service League, a mother/son volunteer organization. Randy is a member of the Texas High School Coaches Association, while Nicole just completed her service as the president of the local chapter of the Texas High School Coaches Wives Association. They are both on the American Cancer Society’s Cattle Baron Gala Committee, a cause that hits close to home for Nicole, who was diagnosed with breast cancer at the age of 32. She has been cancer-free for 12 years, but the ordeal was an eye-opener. “Although it was a very traumatic experience, it has made us closer and stronger as a family,” says Randy. “It has helped us strive to live every day to its fullest and appreciate the wonderful life God has given us.”