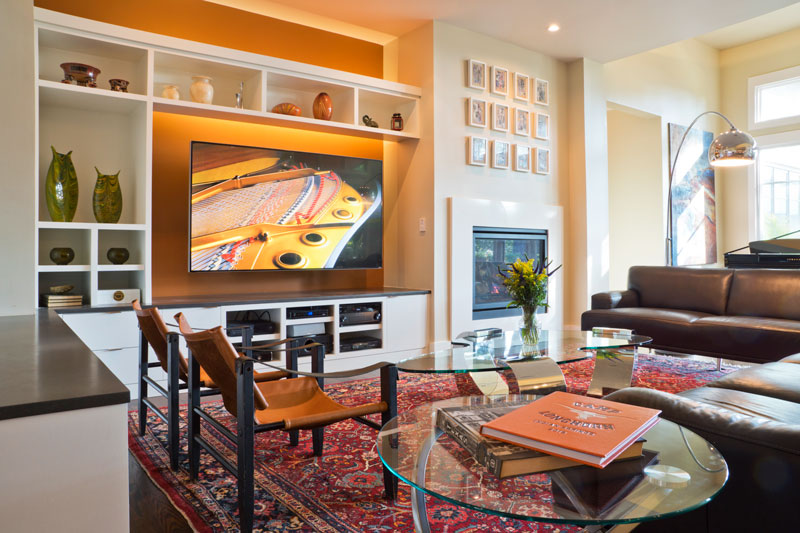 The keys to a successful home renovation are vision and faith, according to Carrie and Peter DeWitt. They should know; they are living in their third renovated home in the Alamo Heights/Terrell Hills neighborhoods.

It’s true that Peter is a partner in Adapt Architecture & Construction, a local company that renovates homes. But even if he wasn’t in the business, he’d still be renovating homes because it’s what he loves to do. Many wives would moan about the constant moving. Carrie comes from a military background and is accustomed to frequent moves, so Peter’s desire for a new project and home is fine with her, as long as her requirements in the home are met. Their two sons are in high school and college, so moving doesn’t bother them, as long as there is room for their friends to visit.

This home’s exterior wasn’t particularly impressive, but it did have a large lot and great oak trees. The way the home was positioned on the lot allowed Peter to expand the home’s footprint to the left. Before he drafted the new plan, the home consisted of 2,450 square feet; by the time he was finished, it had expanded to 3,650 square feet. “When I saw the home’s interior, I wondered what Peter had in mind,” Carrie says. “Like many homes built in the 1950s, it was chopped into small rooms. I had faith in his vision and I love what came from it.”

Mid-Century Modern
Peter’s vision was a mid-century modern take on an open floor plan. He wanted soaring windows to bring the outside in and functional shapes that create a minimalistic appeal. Carrie had two requirements for the home. The first was that the kitchen must open into the living area. The couple loves to entertain, and they like their family and friends to share in meal preparation. The second requirement was for a private office. Carrie is an infectious disease specialist who does a great deal of work from home. The previous house had an office, but it was shut away from the family room and she felt like she missed a lot when her boys were home. She wanted an office that could double as a guest room, adjacent to the family room. 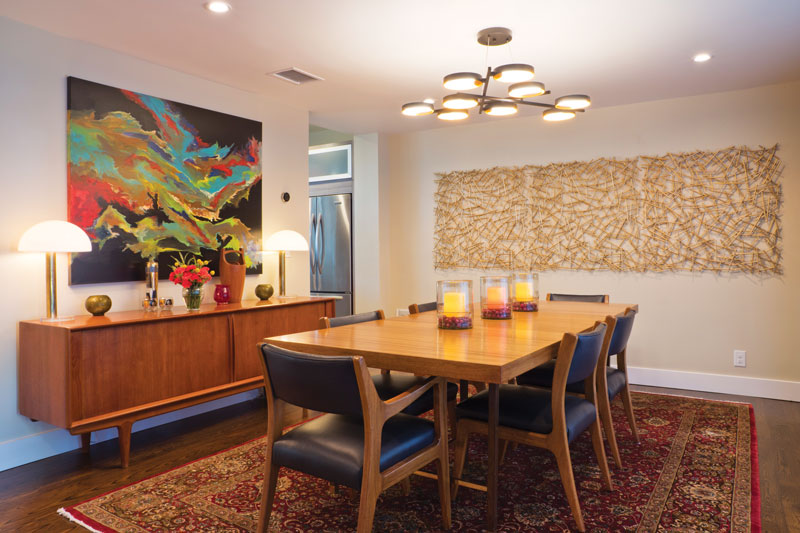 Work in Progress
The DeWitt family moved into the house and Peter and his crew went to work. Intermittently. “We were like the family of the cobbler, whose children never have shoes!” Carrie chuckles. “Peter’s crew would work on the house between other projects. There were times I felt like nothing was happening, although they were working on rewiring or other things you just can’t see.” Finally, the couple rented a house near the middle school their sons attended and Peter’s team worked full time to finish the house. “Renovation isn’t cheap or easy,” Peter cautions, “especially if you are trying to live in the house while it is under construction. When you undertake a renovation project, make changes that you will love — not for resale purposes, but because you want to be happy where you are.” “Always go for quality over quantity,” he adds. “We went a little over budget here but we wanted quality craftsmanship in our materials. Little things like great trim work and good hardware do make a difference.”

The dining room is to the right of the entry. Doug rescued the 65-year-old dining table from a secondhand store and refinished it. The Danish modern buffet features tambour doors. The couple chose the horizontal LED light fixture because the ceiling in the dining room is lower than the rest of the house; a traditional hanging fixture wouldn’t be a good fit. The colorful painting over the buffet is by a local artist. Peter’s love of abstract art is expressed in the painting’s bright colors and movement. The adjacent wall features a metal texture artwork. In the corner an etagere contains Carrie’s china collection from Turkey. “Every dish in that cabinet looks different and comes from a different city in Turkey,” Carrie says. “Those dishes have lots of memories attached to them.” 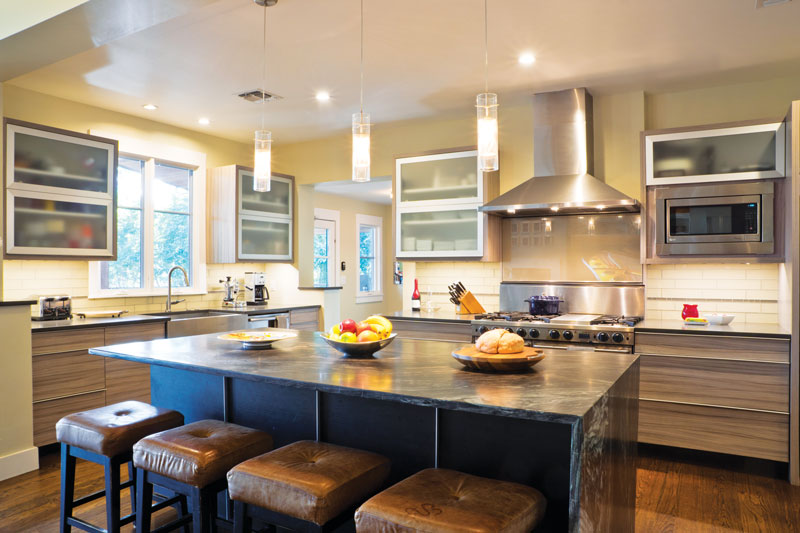 Kitchen Showplace
Peter loves to cook and the kitchen is his showpiece. He and Carrie began sourcing materials by looking at countertops. “Countertop colors and styles affect the whole kitchen’s design,” Peter says. “We spent a lot of time looking for just the right material before we settled on Black Fantasy granite for the island. The veining is this granite slab is dramatic and serves as the kitchen’s focal point. The countertops are quartz, which easily withstands a lot of use.” The island seats four and provides hidden storage on two sides. The side facing the stove has two deep drawers to store pots and frying pans. For this serious cook, a Five Star six-burner gas stove and grill was the only way to go. It features a double oven and a professional vent hood. An oversized microwave offers more cooking power.
The frosted glass cabinet doors “accordion up” rather than opening sideways. This keeps the doors out of the way when the kitchen is full of people. All the electrical outlets are installed in the base of the cabinets, along with under cabinet lighting. To the right of the island is a built-in bar. Instead of traditional shelves, the mini refrigerator has pull out drawers for drink mixers. Another set of frosted glass cabinets overhead holds barware and crystal. “We installed cabinets that are 18 inches deep, which made it possible for us to install a deeper microwave and drawers. It also allowed our Kitchen Aid refrigerator to fit flush with the cabinets, giving it the appearance of being a built-in appliance,“ says Peter.

Beyond the kitchen is a small mudroom with an outdoor exit and an entry to the walk-in pantry. The laundry room is at the end of the hall. This utility room has space for an oversize washer and dryer and plenty of cabinet space. Across from the kitchen are Carrie’s office and the family room. A low dividing wall separates the two, and a frosted glass door slides over the low wall to separate the spaces when Carrie needs privacy. A pocket door completes the room. It’s furnished with an L-shaped desk and a plethora of computer equipment. In the corner are two red chairs that fold out to make a pair of twin beds. “This arrangement is perfect for my work situation,” Carrie says. “The frosted glass sliding wall is a creative way to address my need for privacy and inclusion. And when the wall and pocket door are closed, guests are secure in the knowledge that their room is secluded.”

The black leather sofas in the living room face a floating giant screen television and shelving unit. “When we moved the fireplace from its original location, I was a little stumped at where to put it,” Carrie says. “I knew I didn’t want the television over the fireplace. We played around with the placement and decided to put it beside the wall unit.” The accent wall behind the television picks up the color in the Turkish rug and side chairs. The glass top coffee table is sculptural because the couple didn’t want a table with any sharp edges. Peter dropped the ceiling a bit in the living room and installed LED recessed lighting. The space between the floating ceiling and the actual roof provides the family a great deal of storage space. The far end of the room is the music corner, where their son’s baby grand piano rests beside a wall of windows. The breakfast table sits in an opposite corner and a door opens on to the patio. 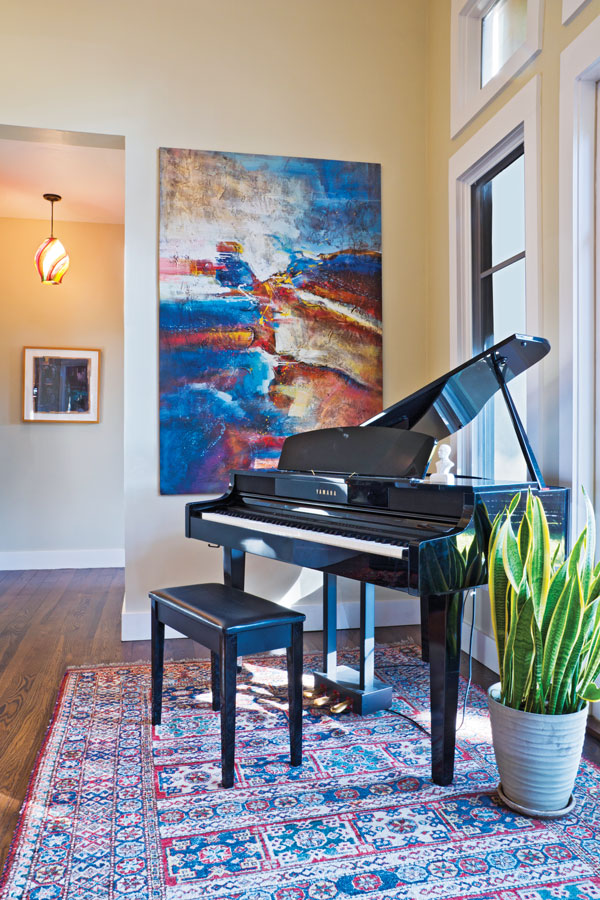 The huge old oak tree in the back yard is one of the reasons the couple bought the lot. It provides good shade and a small amount of privacy for the beautiful covered deck Peter built. The deck roof is constructed of penny groove Douglas fir and is steeply pitched to match the front porch roof. This covered living room offers seating for at least six and shelters Peter’s gas grill and smoker. He built a raised herb garden beside the deck for easy access to the condiments he grows for his barbecue dishes.

The master suite is simply furnished as befits the mid-century movement. Peter built a ceiling-height Douglas fir headboard for the platform bed resting on a large Turkish carpet. Tall corner windows on either side of the headboard wash the room in natural light.
The master bath features walnut cabinets and Carrera marble countertops. The undermounted sinks provide a clean, uncluttered appearance. The large hot box tub with freestanding faucet is positioned beneath an origami pendant light fixture. The wall behind the tub has nine built-in niches for knickknacks and treasures. The double spa shower has Turkish marble on the walls and Carrera marble on the floors. All the shower controls were placed on a back wall so they’d remain out of sight.

“For us, this is a very peaceful home,” Carrie says. “Our master suite is very zen-like. This house makes us happy because it meets our needs for entertainment but it is also a sunny, relaxing place.”

And if Peter finds another house for a remodeling challenge? What then?

Stay tuned. With the DeWitt’s, you never know!