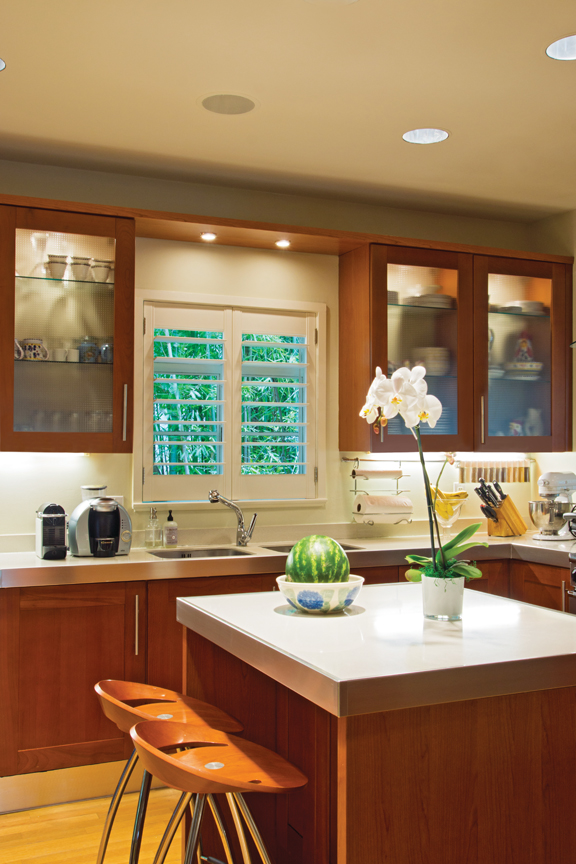 Nested in a canopy of mature trees, a small stone cottage was re-imagined by architect John Grable as a neighborhood beacon dubbed “The Little Lantern.” Two new glass bookends at both ends of the stone block open the living spaces to the outdoors. At night, their glow illuminates the meandering street flowing like a creek through this old, park-like Alamo Heights enclave. Built in the 1930s by noted architect H. C. Thorman, the house held wonderful craftsman qualities that appealed to the young couple who bought it. Their desire to maintain the integrity of the structure was realized with the contemporary addition that was needed for a growing family. “We wanted to have a home where we could raise children,” says the active mother of 5-1/2-year-old twins. The couple moved into the new space just three months before their son and daughter were born. Located near the Alamo Quarry, the house was constructed with limestone acquired from the quarry site. To double the square footage, but remain sensitive to the original 1,400-square-foot stone box, the glass room “bookends” house a formal dining space and a master suite. The master bedroom is built over an existing subterranean garage to the rear of the property. To keep the scale of the expansion from overwhelming the original house or its neighbors, the second story addition steps back from the front facade and retreats into the abundant live oak and elm canopy. The children’s bedrooms and a sun-filled playroom perch in this treetop setting. “We brought our children home to a tree house, and where there are now two beds, there were two cribs,” the delighted mother says. “I like it when you have friends over,” exclaimed her daughter as the twins ran to a window overlooking the backyard and outdoor dining terrace. This has become the lookout where the children wave to guests being entertained by the couple. The formal dining room has yet to fully materialize. With soaring exposed-beam ceilings and floor-to-ceiling expanses of glass, the space became a playroom for the growing children. A whimsical teepee rests at the ready for creative campouts, while a mini-trampoline, slide set, art easel, train station and cars offer indoor entertainment for the adventuresome duo and their friends. “When they were younger, a tricycle course ran throughout the house,” says mom. This is a home meant for family. The proximity of the glass box playscape to the street offers frequent encounters with neighbors walking their dogs or other young couples pushing children in strollers along the tree-shaded avenue. The children wave to passersby while the family’s pet pooch greets four-legged friends with equal zeal. From their refined sophistication plus contemporary furnishings blended impeccably with treasured family pieces and an impressive collection of regional contemporary art, there is no doubt that these are also adult spaces. Yet they are completely child friendly. It is a harmonious habitat where family life is cherished and enjoyed.