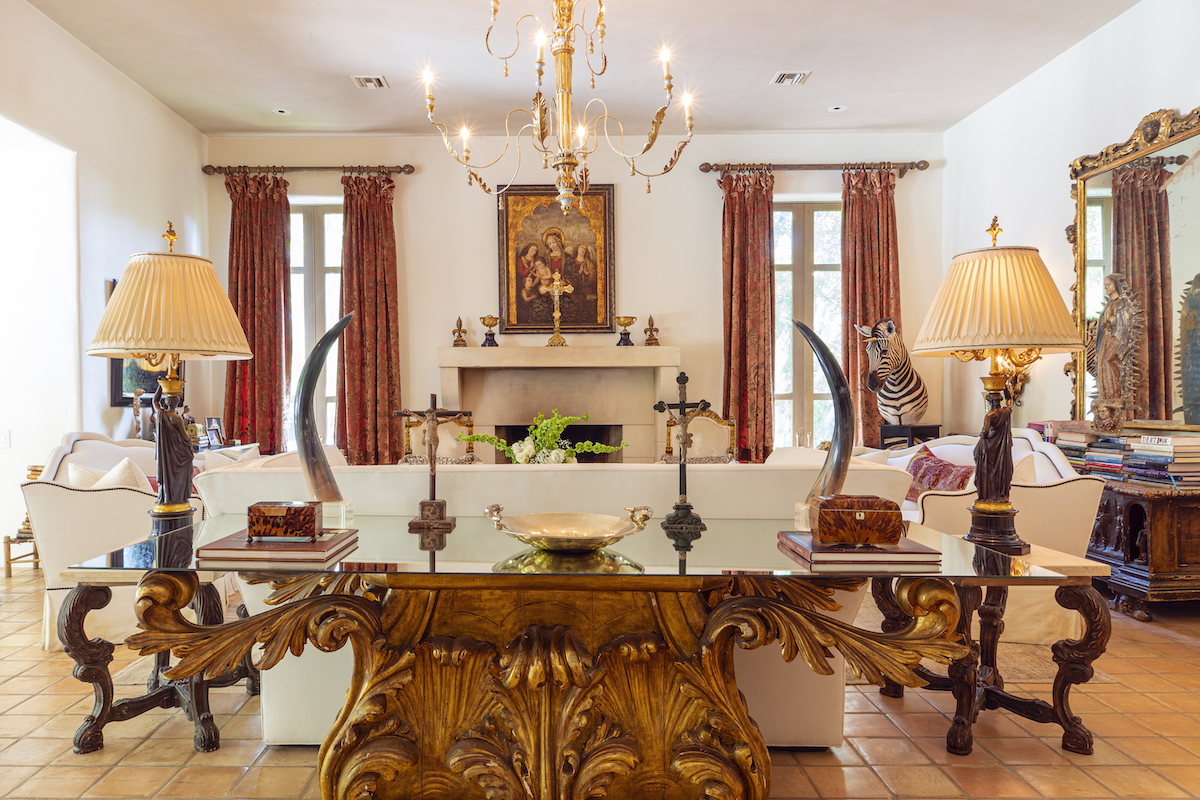 It is often said that home is where the heart resides, but for designer Alicia Bryan of Bella Casa Designs the Alamo Heights sanctuary that she has created embodies every part of her being – soul and spirit – in perfect harmony. With impeccable style, she has seamlessly melded Late Italian Renaissance, Mexican Colonial Period and Texas primitive furnishings into a balanced whole that speaks volumes about who she is and where she has been.

“It’s just in my DNA,” Alicia stated. “My grandmother Josey Gretchen Bryan was a collector and entertained in the era of wonderful dinner parties. She taught me how to set a beautiful table.”

And the fruit did not fall far from the tree. Her parents gave her an appreciation for all things Texan. The Bryan Museum, located in the historic Galveston Orphans Home, houses The Bryan Collection. Parents J.P. and Mary Jon Bryan assembled one of the world’s largest collections of historical artifacts, documents, and artwork relating to Texas and the American West.

With an incredible knowledge of western and Texas history, her father took on the task of restoring the iconic Gage Hotel, bringing back to life an integral part of Texas’ heritage. 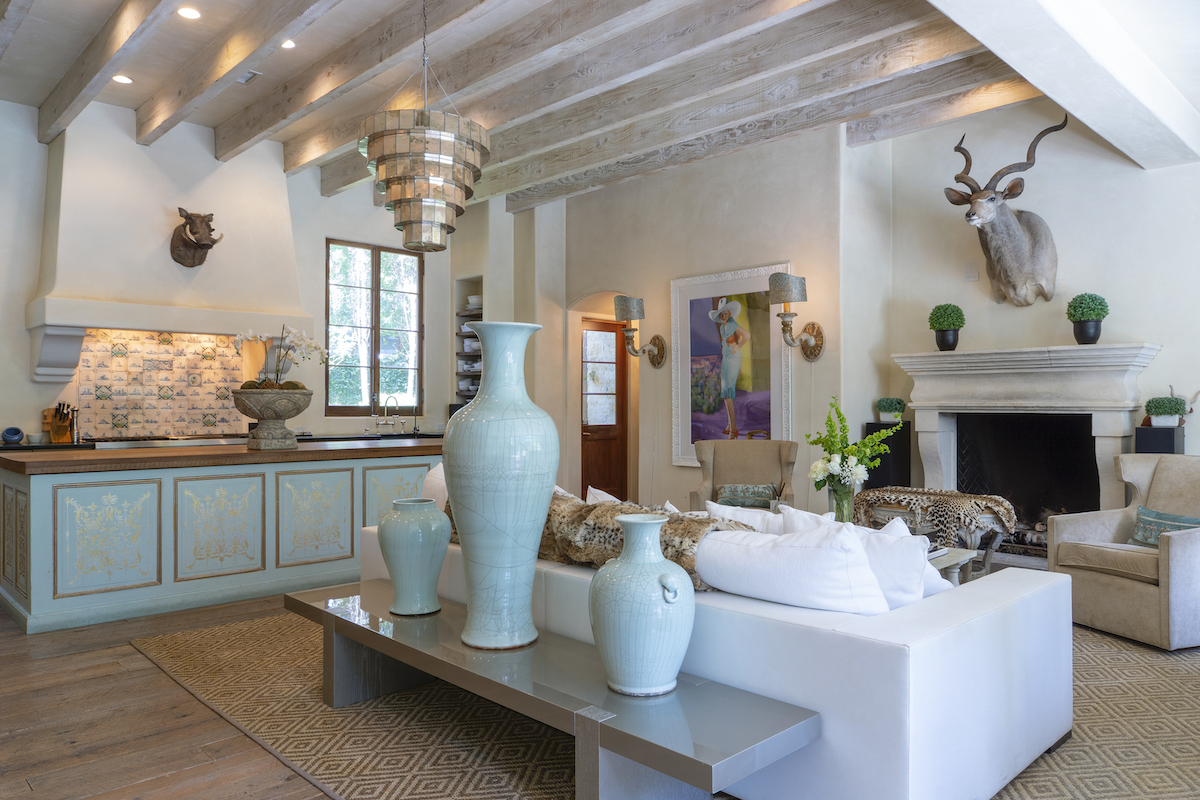 Open concept and casual, the kitchen features a cypress wood countertop, French tile backsplash and appliances concealed behind wooden doors painted Robin’s egg blue. A warthog and greater kudu from an African hunting excursion watch over the comings of family and friends.

Alicia began working in the design profession at the age of 19, assisting her parents with family business ventures.

Collecting and assembling Texas primitives, classic Mexican colonial furniture, Retablos and Santos for The Gage Hotel in Marathon honed her skills at drawing from cultures of the North American Indians, Spanish, Mexican and Anglo Cowboys.

With a mix of what she describes as “country girl/city girl,” Alicia has brought together a collection of furnishings and accessories that echo each phase of her upbringing. Trips to Rome and Paris garnered an appreciation of both religious and secular pieces that reflect a well-worn patina through centuries of use.

With all of its formality, whimsy plays an integral part in Alicia’s design plan. In the living room, a zebra mount is outfitted with a child’s unicorn hat. Sumptuous sofas upholstered in white linen encourage guests to sink in for a relaxing stay that encourages conversation. 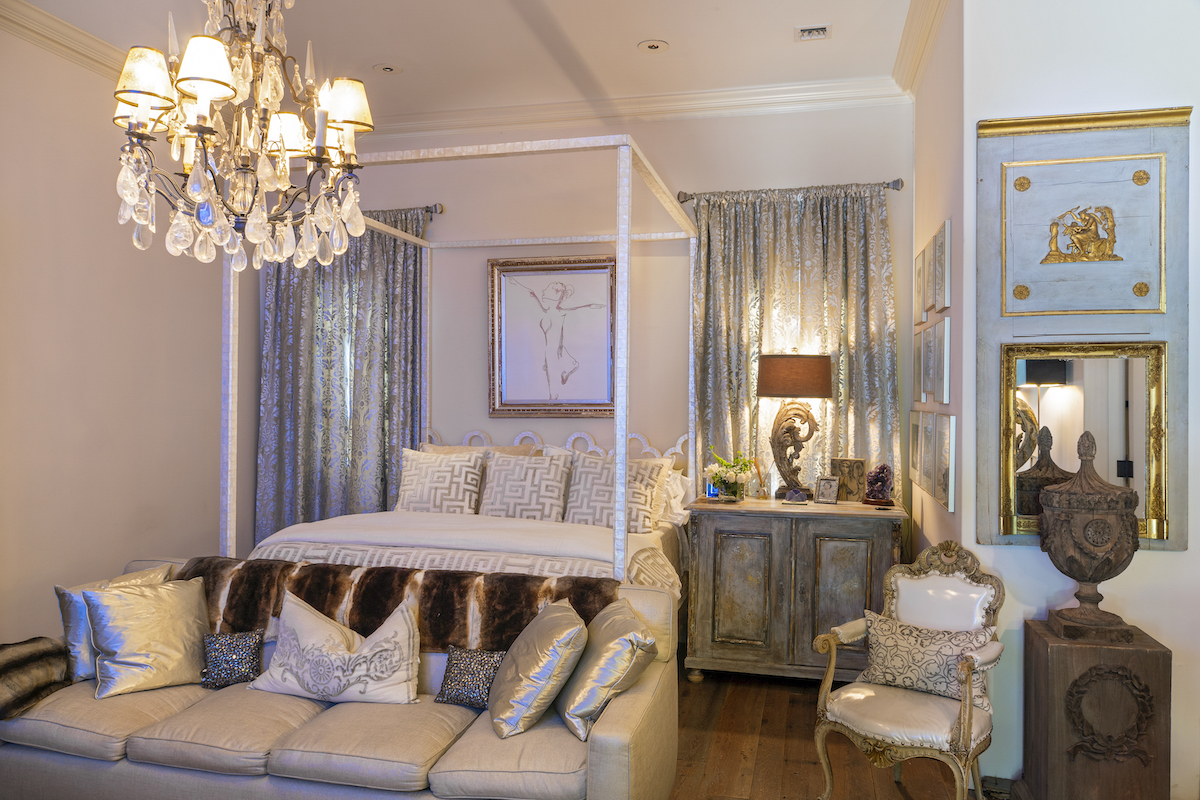 A French tester bed pairs with a rock crystal French chandelier in a tranquil setting of silvery blue hues.

Massive Italian doors open onto the formal dining room anchored by an oil of the Crucifixion of Jesus Christ found in San Miguel de Allende. Tables and chairs are Spanish Colonial.

With an open concept kitchen, the family room and informal dining area flow freely together, creating a restive retreat for family gatherings and casual dinner parties. Artist Susan Riley was commissioned to do a portrait of Hollywood film star Virginia Bruce in a role that nods to Alicia’s Texas roots. A popular singer and actress in the 30s and 40s, Bruce ended her career starring in a film produced by Andy Warhol.

An Italian vineyard table paired with hand-carved Italian bench and upholstered white linen slipcovered high back chairs play off of the clean contemporary lines of the sofa. Robin’s egg blue walls and doors hiding kitchen appliances pull the setting together.

A consummate cook and firm believer that proper nutrition is essential for wellness of being, Alicia has adopted recipes from her extensive travels. While living in West Texas with her then young children, as she prepared the evening meal they would ask, “What country are we eating in tonight.”

Life is a journey, and Alicia’s home is a beautiful reflection of the paths that she has taken.

An antique church door repurposed into a mirror reflects the image of a wooden sculpture of St John holding a wreath of roses where whimsy interjects a partridge nesting in the bouquet.

Open concept and casual, the kitchen features a cypress wood countertop, French tile backsplash and appliances concealed behind wooden doors painted Robin’s egg blue. A warthog and greater kudu from an African hunting excursion watch over the comings of family and friends.

A French tester bed pairs with a rock crystal French chandelier in a tranquil setting of silvery blue hues.