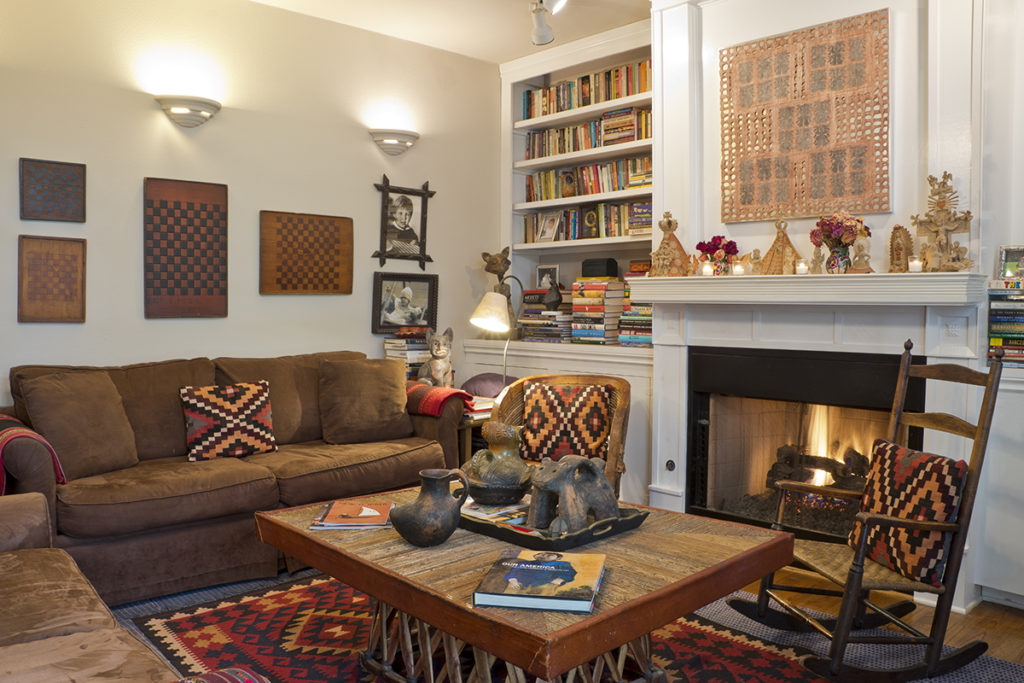 Working in the art department at Frost Bros. Department Store in the early 1960s, Margaret Schellenberg would often lunch with the artsy set at Schilo’s Delicatessen and Casa Rio Restaurant. After lunch, the artists would stroll next door to browse the folk art aisles of Kerr’s Mexican Curios, a souvenir shop filled with pottery, paper flowers and punched metal from Mexico.

“That got me hooked,” exclaimed Margaret. “My first purchase was a 50-cent investment for a clay fruit piggy bank.” She still has that first piece nestled in a large wooden bowl filled with her collection of children’s clay fruit banks.

During HemisFair ‘68, a folk art collection of some 10,000 toys and miniatures on display opened Margaret’s eyes to works from the villages of Panama, Mexico, Brazil, Peru, Guatemala, Bolivia, Costa Rica, Venezuela, Chile and Ecuador through El Encanto de un Pueblo, designed by the internationally famous architect and designer Alexander Girard. “When you learn to appreciate folk art, you can see the beauty in it all around the world,” she said. 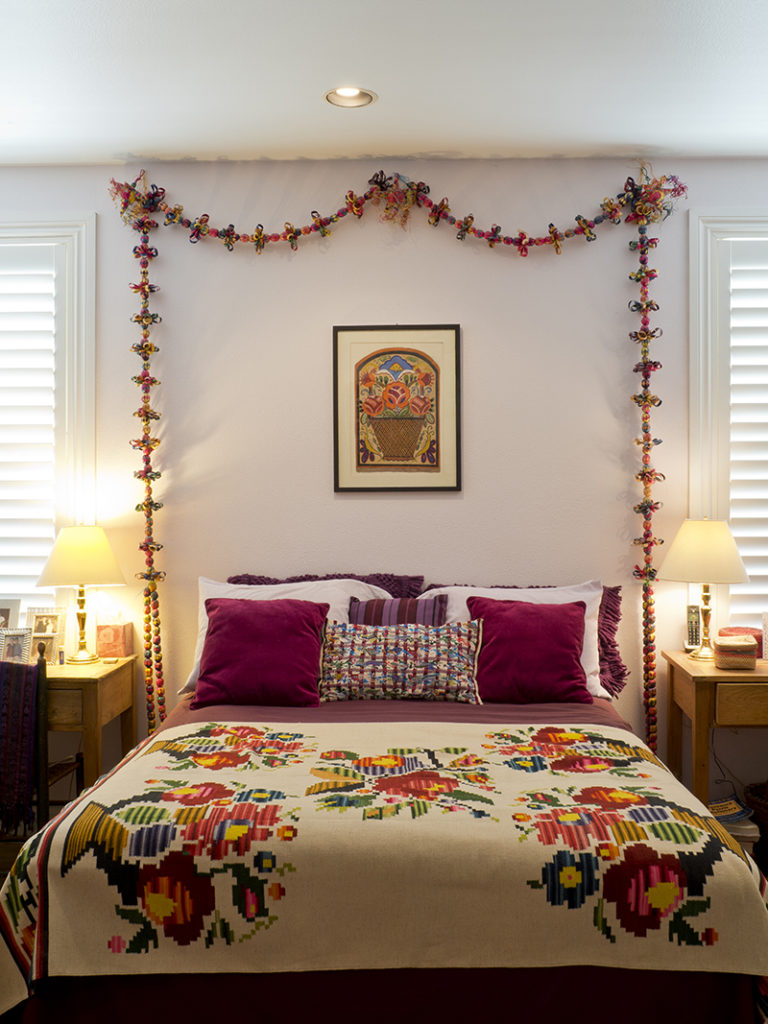 With her husband, Fred, working for the United States government, in 1967 they moved to Washington, D.C., where it was a bit more difficult for Margaret to find pieces for her Mexican collection. “I did find some of my best pieces in Washington, and I began to collect American folk art,” Margaret said. .

Traveling to Tonala, Mexico, on a “proper honeymoon trip,” the couple visited the renowned ceramic studios of Ken Edwards, instrumental in reviving the techniques introduced by the Spanish during the colonial period and for the introduction of high-fire production in the 1950s with partner Jorge Wilmot. They had a set of custom dishware made and waited until the pieces were completed, visiting folk artists in the area.

Reassigned to Mexico City, where Fred continued government service, the avid collectors traveled throughout Mexico on their folk art quest. 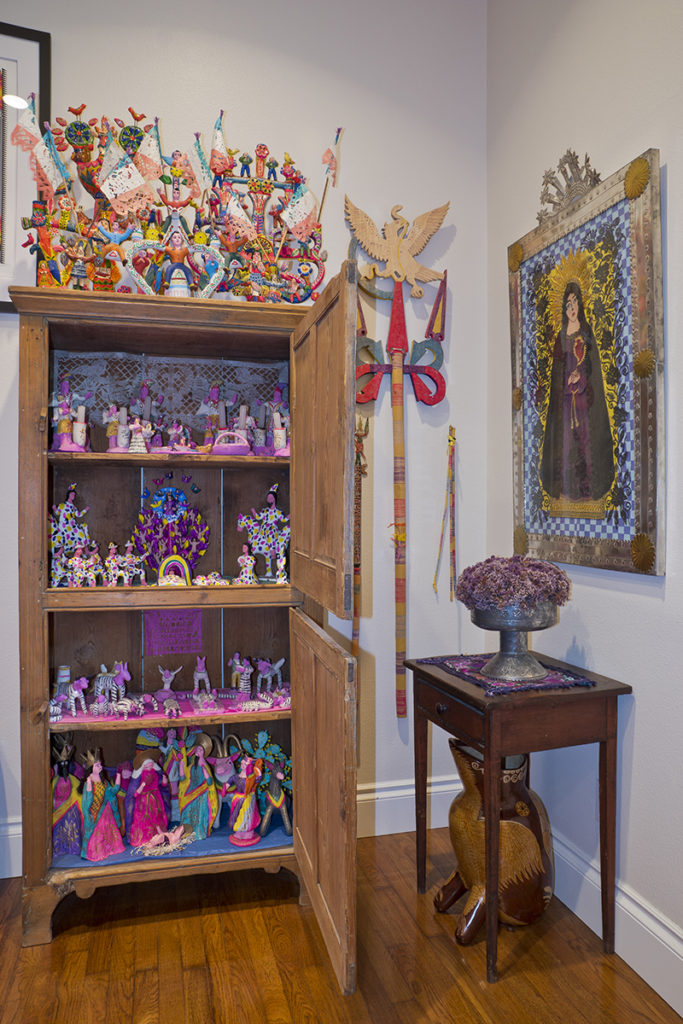 On a trip to an isolated village, a bus driver left them on the side of the road far from the desired destination. A woman with a baby in tow offered to walk them to the village, with Margaret carrying the baby. When they told the young woman that they were hoping to see Señora Felipa, the girl said, “Oh, that is my great-grandmother!’

Working with the Woman’s Cooperative, Margaret spent the afternoon viewing the sites of the village. Fred was subjugated to hanging out with the woman’s husband, who regaled him with stories of riding with Emilio Zapata during the Revolution of 1910. “We drank tequila all afternoon,” recalls Fred.

On another excursion to a far-removed village, the couple traveled in the back of a dusty pickup truck. As they approached their destination, a constant sound of pounding noise grew louder. Fred recalled, “You could hear thump, thump, thump, thump from every direction, and it was constant. All of the villagers were beating bark into pulp to make paper.”

Totems were created from the paper pulp to bring good fortune to the harvest. The figures were planted into the ground with the seed as prayers for a good harvest.

“Folk art is usually anonymous,” explained Margaret. “And they pass their skills along from one generation to the next. If it is not continued, then it is lost.” The vast collection so skillfully acquired by this passionate pair pays homage to the known and unknown hands of the artisan. 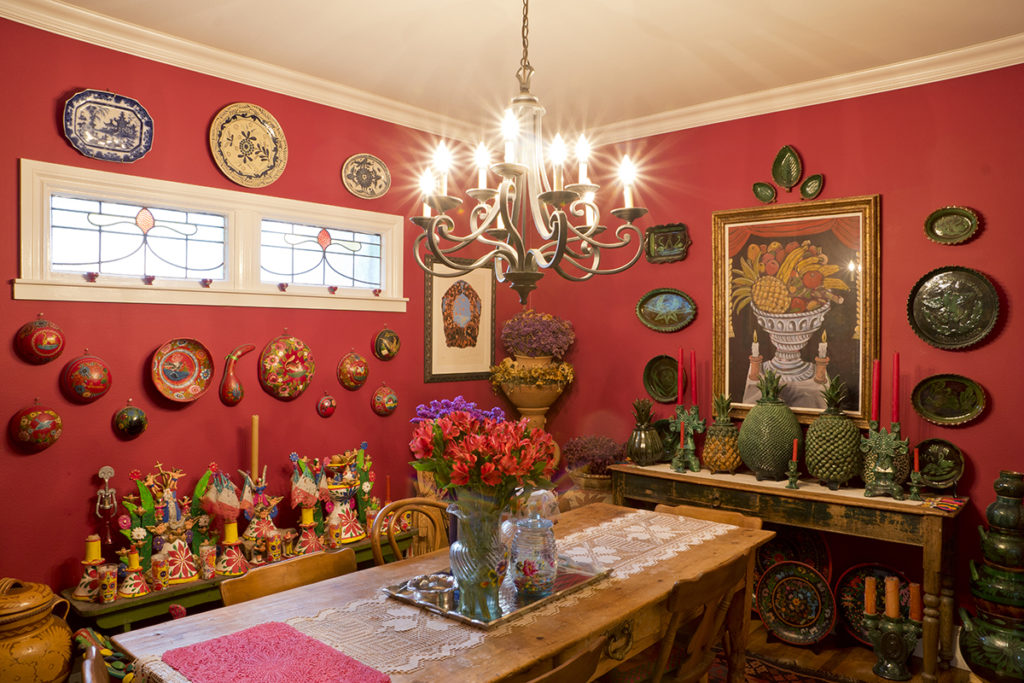